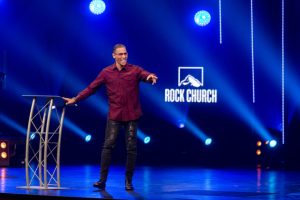 By Miles McPherson, CP Exclusive
When I was a kid in the 60s, it seemed that every American had a similar vision as to what the “good life” looked like: Go to college, get a job with a big company, and then ride that out for the rest of your career until they give you a gold watch, a check and a party.
Today, in the digital age, all that has been turned on its head. The new generation of Americans start stuff. We have 27 million entrepreneurs in America right now. That is a staggering number. The entire population of Australia is only 25 million. Going to work for somebody else seems to be on everybody’s Plan B or C list, not Plan A. Dreams and creativity are everywhere. That mindset is even shared by Christians who are also very entrepreneurial minded, and it has spiked the number of those starting ministries and churches. This is great news. I would like to offer a little piece of my experience to this new class of American Dreamers.
We started the Rock Church 20 years ago. As we celebrate our anniversary, I’m reflecting on being a young pastor who had the audacity to ask God to bless my efforts to start a church. I’m daily reminded of the fact that the Rock Church’s existence is a miracle of epic proportions.
The number of obstacles that came in the way of it becoming a reality could fill a book, from a lack of money, not being granted permits, having to win over city council, waiting on city leadership to decide whether a proposal of a new terminal at the San Diego International Airport would get in the way. It was six and a half long years of obstacle after obstacle to overcome. It was a lot like hacking our way through a jungle. And yet God kept saying, “Here, Miles. The church is going to go here.”
So what do you do when God gives you a vision, breathes life into it and then allows opposing forces to come against you?
Pray.
“Well, that’s obvious,” you might say. But I am not talking about prayer as a supplement to your hard work. I am talking about hard work as a supplement to prayer. I am suggesting a paradigm shift. Prayer isn’t in the chariot. Prayer is the chariot.
Many years ago, when the Billy Graham Crusades were starting to gain momentum and people were coming to Christ by the droves, a very wealthy Christian man came to him and said that instead of Billy always asking for donations, that he would bank roll all of his operations so that Billy could spend his time doing what he did best: preach.
Billy turned him down. The wealthy man pushed back on Billy’s seemingly crazy response. Why in the world would he walk away from such an extraordinary offer where he wouldn’t have to beg for money anymore? Who wouldn’t want that?
Edifi gives you today’s most popular Christian podcasts all in a single app experience you can trust. Edifi’s powerful app aggregator offers the most Christian-centric streaming audio experience in the world today. Download edifi NOW for Free!
Billy said that it never failed — every time he received a donation in the mail, especially the ones where there was a one, five or ten dollar bill, the sender always wrote, “I am praying for you.” If he had an underwriter for the crusades, he’d lose all those prayers. Billy was essentially saying, I’d rather have a buck and a prayer than all the money in the world.
That’s the way big dreams come to life.
Without the prayers of thousands of people who came alongside me, I believe the Rock Church would never have happened. Perhaps that is why the process went as it did. God was trying to see if we would take Him seriously enough to get on our knees and seek Him with all our might. If you are an entrepreneur, perhaps he is asking that of you.
If you are starting up a business, church or ministry that you feel God has led you to, and it seems nearly impossible that it will get off the ground, there is a place you can go where the likelihood of success begins to rise. It’s on your knees.
Rock Church, with 20,000 weekly attendees across five campuses, will be celebrating 20 years this month.
Miles McPherson is the Senior Pastor of the Rock Church in San Diego. He is also a motivational speaker and author. McPherson’s latest book “The Third Option” speaks out about the pervasive racial divisions in today’s culture and argues that we must learn to see people not by the color of their skin, but as God sees them—humans created in the image of God.
• Source: https://www.christianpost.com/opinion/rock-church-turns-20-big-dreams-billy-graham-and-wealthy-christian-man.html