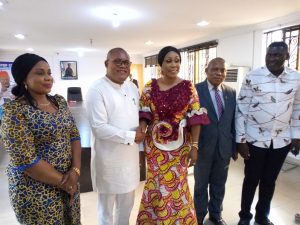 The Senior Political Adviser to the Governor of Delta State, Rt. Hon. Funkekeme Solomon has called for concerted effort to use the power of advocacy and awareness creation to combat the evil of human trafficking.

He spoke when he received the Director General, National Agency for the Prohibition of Trafficking in Persons (NAPTIP), Dame Julie Okah-Donli and her team in the conference room of his office in Asaba.

While commending the Director General and the Agency for taking on such onerous responsibility, Rt. Hon. Solomon noted that it was a daunting task for the agency and the team as they were confronting the source of livelihood of those involved in the trade illicit and ignoble trade, and so, the agency and its officials must expect a backlash.

Solomon also admonished parents not to be taken in when people talk to them about opportunity for their children to go and work abroad because of the risk factor involved, as no one that goes to another country will live an idle life. “No one can do nothing in another country. They must be made to engage in something,” he said, noting that most times the victims are forced to engage in very demeaning jobs.

“It is important that parents and mothers are told the truth about the evils and dangers of human trafficking,” the senior Political Adviser said, noting also that NAPTIP and its officials are doing a difficult job.

He called for a concerted effort by all to save the youths of this country from becoming victims of human trafficking, with a promise to get his office to also be part of the advocacy and awareness creation against human trafficking.

Earlier in her speech, NAPTIP Director General said human trafficking is rated after illicit arms deal as the second largest source of criminal income worldwide, generating about $150 billion per annum, according to the international Labour Organization.

While thanking Governor Okowa for the support extended to NAPTIP in the joint effort to eradicate human trafficking in the country, she sought the support of the senior Political Adviser for the state government to make available the funding that the task force requires in the state to carryout its responsibilities.

Dame Julie Okah-Donli also called on the state government for a change in strategy for empowering people so as to achieve better results.

ELOZINO: We all killed her