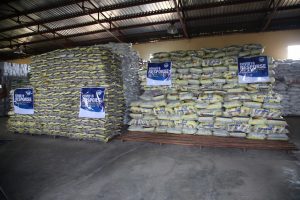 Some food items procured by State Government at the food Bank, Ibusa for distribution to indigent Deltans to assuage the effects of the lockdown order in the State as a result of the COVID-19 pandemic. PHOTO: JIBUNOR SAMUEL. 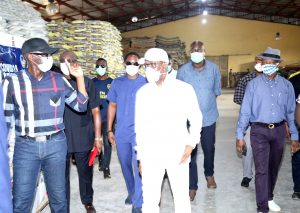 Governor Okowa (in white) at one of the food banks prepared by his government.

Delta Governor, Sen. (Dr) Ifeanyi Okowa, has restated the state government’s commitment to providing palliatives to cushion the effect of the COVID-19 lockdown on the vulnerable in the state.

The governor disclosed this while speaking to newsmen shortly after inspecting the state’s Food Bank at Ibusa on Thursday.

He said that credible Deltans, including local government council chairmen, the clergy, opinion leaders, women and youth representatives, had been appointed into committees to ensure that the food items got to the right people.

According to him, bulk of the food items, including rice and beans, which will be distributed in a few days, were procured by the state government and the rest came from donors.

Okowa thanked the donors for the support and called on others to contribute to the three food banks established by the state government at Ibusa, Warri and Asaba.

He stressed that more food items were needed to enable the government to cover all parts of the state in distribution.

He assured that the distribution would commence at the weekend to the various Wards, adding that measures had been put in place to ensure that the food items got to the vulnerable irrespective of their political or other leanings.

“We have food stocked in our warehouses in Ibusa, Asaba and Warri and these are the three spots from which we will commence distribution to our various wards and villages.

“We have beans for distribution; we also have rice, noodles and some other food items for distribution and we have constituted committees comprising every local government chairman, members of the House of Assembly, religious leaders.

“The committees have been put in place at the local government and at the ward levels, and we have emphasised that there will be no politics in the distribution of these items. It is for every Deltan and non-Deltan living in the state.

“Once we perfect the processes being put in place by the committee at the state level, we will commence distribution at the weekend and it is our prayer that they will reach out to the most indigent among our people.

“We also appeal to privileged citizens in our various communities to support the effort of government,’’ the governor said.

He also announced that some persons and organizations had made fiscal donations to the states COVID-19 account at the bank and expressed appreciation to the donors.

“I appeal to people who will want to make donations to please attend to us at this point in time because people are actually in need,’’ he added.

The governor disclosed that the fourth confirmed case of COVID-19 in the state was being treated at one of the Isolation Centres in Asaba, adding that the patients currently on treatment at the centres in the state were doing well.

He said that more blood samples of suspected cases had been sent to the laboratory for test, and advised Deltans with symptoms of the virus to quickly reach out to medical experts or COVID-19 team to avert complications and infection of other persons.

To owners of private health facilities, Okowa advised them to report suspected cases of the virus to public health centres to protect other persons from the infectious disease.

He said that distribution of the first phase of one million face masks produced by the state government for residents of the state would commence in two weeks.

According to him, the face masks are made of clothing materials that can be used continuously after being washed with soap and water.

“I have also specifically stated too that we have already made face masks for our people because we are aware that many of them may not be able to purchase for themselves.

“We are using the face masks made with cloth because from all research done thus far, it’s obvious that the use of the face masks tends to limit the transmission of the virus and to that extent, we are determined to produce about a million for distribution to our people,” he said.

The governor pledged his administration’s determination to make the state safe and healthy for all residents.

The governor was conducted round the food bank by Secretary to State Government, Mr Chiedu Ebie; Commissioner, Bureau for Special Duties, Mr Mofe Pirah; Commissioner for Information, Mr Charles Aniagwu and his counterpart of Oil and Gas, Prince Emman Amgbaduba. 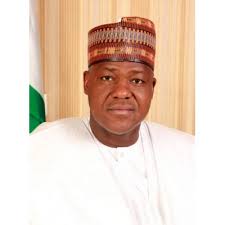