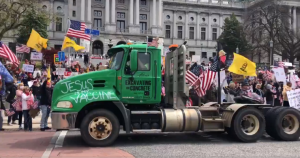 By Leonardo Blair, Christian Post Reporter
Hundreds of Pennsylvania residents joined by Republican lawmakers protested a stay-at-home order outside the state Capitol in Harrisburg Monday declaring messages like “Jesus Is My Vaccine” and demanded a reopening of the local economy amid the coronavirus pandemic.
The stay-at-home order which has been extended by Pennsylvania Gov. Tom Wolf until May 8, was put in place to manage the spread of the more than 33,000 confirmed cases of the virus in the state which had led to 1,200 deaths in the state, The Philadelphia Inquirer reported.
“We need to open up now,” Republican state Sen. Doug Mastriano told protesters.
“These leaders must not focus on just the lives at risk from the horrible virus,” fellow Republican state Rep. Aaron Bernstine added. “Many lives like yours are in danger from a shuttered business, the hunger and homelessness.”
Similar protests have taken place in state capitals across the country, such as Michigan, Texas, Maryland, and Washington state, CNN reported, and additional protests in other states are expected to follow.
It’s estimated that between 22 million and 30 million Americans are now out of work due to layoffs sparked by state lockdowns due to the new coronavirus that originated in Wuhan, China.
Bernstine had been lobbying for Wolf to sign a bill aimed at reopening some businesses closed amid the pandemic but Wolf vetoed the legislation while noting that it was “not an easy decision.”
“Reopening tens of thousands of businesses too early will only increase the spread of the virus, place more lives at risk, increase the death tolls, and extend the length of the economic hardships created by the pandemic,” Wolf said in his veto message.
The protests began ahead of the White House Coronavirus Task Force meeting last Thursday where President Trump release a three-phase plan to start reopening the economy and allow people to go back to work.
“I think the president wants this country to get back to work,” Chris Dorr, one of the organizers of the Pennsylvania protests told CNN. “I think the president is on the side of the American people and he doesn’t want this country to suffer any longer than humanly possible.”
Kateri Walls told Trib Live that she has run a pet grooming business in Pittsburgh’s Garfield neighborhood for 24 years. She has been closed for the past five weeks with no income, she said.
“I know how to operate. I’m a responsible person,” she said, explaining that she has clients who bring their pets in weekly for baths and grooming to treat various skin conditions.
She said she had plans to operate the business as a drive-thru but was required to remain closed after being denied a waiver.
“They’re picking winners and losers,” she said.
Some demonstrators even expressed doubt about how widespread the coronavirus really is.
“All the projections were wrong, but we are still telling people to stay home and businesses to close,” Mark Cooper, a retired truck driver, told Reuters. “This is not quarantine, this is tyranny.”
On Monday, Anthony Fauci, director of the National Institute of Allergy and Infectious Diseases, discussed the health risks associated with people going back to work and the implementation of the administration’s three-phased approach.
“If you jump the gun, and go into a situation where you have a big spike, you’re going to set yourself back,” Fauci told ABC News. “So as painful as it is to go by the careful guidelines of gradually phasing into a reopening — it’s going to backfire. That’s the problem.”
• Source: https://www.christianpost.com/us/jesus-is-my-vaccine-protest-sign-declares-in-pennsylvania-as-people-demand-reopening-of-economy.html

Modular refinery package arrives, to be installed in Delta