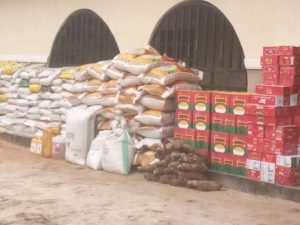 Some of Ochor Ochor’s food items for distribution to constituents.

As part of efforts to cushion the challenges faced by many Deltans as a result of the Lockdown by the government of Delta State to curb the spread of the coronavirus pandemic, the Deputy Speaker of the Delta State House of Assembly Rt. Hon Christopher Ochor Ochor has distributed food items to people of Ukwuani Local Government Area.

The Deputy Speaker stated that in distributing the food items, consideration was also made for other vulnerables in the area, such as those in the orphanages, and other special cases who cannot be able to afford much for the family.
He pointed out that the food items giving is for the communities and urged the community leadership to ensure they get to those identified to be in dire need, so that the essence of the distribution would be justified as it is targeted at alleviating the sufferings.

Speaking through two of his aides, Mr. Emmanuel Enebeli, the Press Secretary, he stated that the distribution of the food items was the second phase of the campaign on the existence of the Coronavirus Virus Disease, as the Deputy Speaker had on Saturday March 28, 2020, carried out a sensitisation programme round the Local Government Area on the need to observe medical advice on how to stay safe against the spread of the disease.

Also Speaking, The Senior Special Assistance to the Deputy Speaker Political, Deacon Moses Osemeke described the gesture as a way to put smiles on the faces of the entire Ukwuani people. He appealed to leaders of communities to ensure that the less privileged individuals in their midst have a fair share of the items.
Some prominent Chiefs in Ukwuani local government area who received the items on behalf of the communities, including members of the Ukwuani legislative arm applauded the Deputy Speaker and assured him that they will distribute the food items judiciously.

Buhari, Tinubu say they are on rescue mission