Home Abuja Nigeria’s ‘genocide’: Who is helping the thousands of displaced Christians? 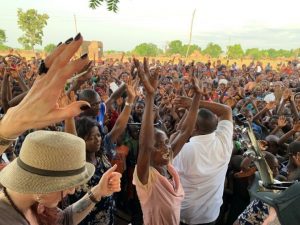 Some displaced Christians in Nigeria at a revival meeting.

By Samuel Smith, CP Reporter
Just like hundreds of thousands of Christians today in Nigeria, pastor Jeremiah Okudo Elaigwu is no stranger to leaving all of his possessions behind and fleeing for his life.

Elaigwu fled Borno state during the beginning of the Islamic terrorist group Boko Haram’s insurgency in the northeast that displaced millions and killed thousands in the last decade-plus. In an interview with The Christian Post, he explained that he sold his home in Maiduguri at a “giveaway” price so he could escape the violence with his family in 2010.

After fleeing to the city of Abuja in the center of the country, Elaigwu moved his family again three years later in response to deadly twin bombings claimed by Boko Haram months earlier not too far from his home. He and his family moved back to his hometown in the lush Middle Belt state of Benue in December 2014 hoping to find peace in a familiar place.

“I saw the need to be home where there would be no need for running anymore,” Elaigwu said of moving back to his native local government area of Agatu, a predominantly Christian farming community. “I hardly had settled when the trouble started. The Fulani herdsmen were on the ground and they were causing everybody to flee again.”

The U.N. estimates that there are over 2.4 million people displaced by Boko Haram’s insurgency in northeast Nigeria and across the Lake Chad region.

Meanwhile, there are hundreds of thousands of people like Elaigwu from farming communities who have been displaced in Middle Belt states like Benue, Plateau, Taraba and Kaduna due to massacres committed by militants from nomadic predominantly Muslim Fulani herding communities in recent years.

Elaigwu, who was affiliated with the Pentecostal Redeemed Christian Church of God before becoming an independent pastor, said Agatu is a fertile place for farming almost all year-round because of all the tributaries of the Benue River. He warned that Fulani militants now “have a desire to push my people away from here so they can have it.”

Weeks after he settled into his new home in Agatu, he found himself helping many of his new neighbors flee from their village due to the threat of encroaching Fulani militants who raided and burned other villages in the area.

“I have a Range Rover van from 1999. It was very serviceable,” Elaigwu detailed. “We packed as many people as possible in the van to [transport them]from the village to the neighboring local government area. Some folks had to sit on top of the roof. On the road, we met old people who were struggling and asking us to carry them. It was one experience I don’t want to remember.”

By the time they arrived in the neighboring local government area of Otukpo, about 100 kilometers away, Elaigwu said the reality of the situation had set in.
“By the time you have gone to a good place for safety, you discover that you lose everything that you have left behind: livestock, foodstuff, property,” he said. “You just come back and things are gone. We lost so many things to their campaigns of war.”

What’s the situation?
With crises going on in both the northeast and middle parts of Nigeria, some estimates have suggested that as many as 11,500 Christians have been killed in the country since June 2015 by Boko Haram, its splinter group (Islamic State West Africa Province), Fulani herdsmen and highway bandits.

Many of those displaced in Nigeria — Christians and Muslims — are living in displacement camps, in the homes of relatives or host communities. Many are living in hunger and lack access to medical care as well as education as their plight fails to receive attention from the international mainstream media.

According to the U.N., the decadelong crisis in the northeast alone has left over 7 million people in need of humanitarian assistance in the northeastern states of Borno, Adamawa and Yobe. Most of those displaced by Boko Haram are in the Muslim majority Borno state. The U.N. Office for the Coordination of Humanitarian Affairs reports that most of those displaced in Borno are women and children with about a quarter being younger than age 5.

Violence in the Middle Belt — a region known as Nigeria’s food basket — has resulted in reduced crop productivity as farming communities have been displaced without access to their farmlands.
Advocates say that those displaced complain of receiving little to no help from the federal government and minimal help from state governments.

A lack of humanitarian assistance and food is causing some displaced communities to compete with each other for resources, one source who spoke with CP explained.

Although there are some international and domestic nongovernmental organizations and church bodies doing their part to assist victims in both the northeast and Middle Belt, one church leader told CP that donor fatigue is starting to set in and more assistance is needed to help these communities overcome not only the hardships of displacement but the trauma from their horrific experiences.

Abducted by Boko Haram
Amina Adams Ghumdia, a mother of five, fled from Maiduguri in Borno to neighboring Adamawa state after her husband was killed and two of her sons were injured in a Boko Haram attack on their home in October 2012.

“So many of them entered our house around 7 p.m. in the evening,” she told CP of the attack in a phone interview, adding that her family was targeted for being Christians. “They entered the house and they attacked all of us in the house and then they slaughtered two of my children and then my husband.”

She initially stayed with her sister in Adamawa until she was able to find a house to rent for her family.

Although Ghumdia moved to Adamawa to escape the violence, she was abducted by Boko Haram militants in June 2017 while transporting her in-laws’ car to her new home from Maiduguri. She was taken along with 15 others — a group that included 11 women and five men.

Ghumdia said the militants killed the five men and took the 11 women to their headquarters in the Sambisa Forest where they were held for eight months and released to the Red Cross after negotiation by the government. However, one of the ladies she was with did not make it through the ordeal alive.

Although she was not physically harmed by the militants during her imprisonment, she said she was forced to sleep in a room with 10 other women and was not given a lot of food. She said they felt like prisoners as they were not allowed to go outside of the compound. She said they had little interaction with other groups of women and girls that have been kidnapped by Boko Haram such as the Chibok schoolgirls.

Living in Adamawa again after her release from the terrorists, Ghumdia said she has received little in the way of humanitarian assistance outside of a donation from the Christian group Mission Africa International, who helped her pay for her children’s tuition fees.

“Things have never been improving in Adamawa,” she said. “It’s been very, very difficult for me. I was working in Borno state. Since when they abducted me, I did not go back to my work. For six months they did not pay me. It’s only last month that they have started paying me. It is very hard for me since my children are in school and I am raising a house. Things are just very difficult.”
Similar to people displaced in other states, many displaced in Borno and Adamawa live in organized displacement camps in tents and others are living in host communities.

“There is a staggering number of people who have been displaced,” said Father Joseph Bature, the director of psychological support and trauma care for the Justice Development & Peace Commission of the Catholic Diocese of Maiduguri.

“Some can’t even find space to live in the camps. Some have their relatives or their townsmen that live around Maiduguri, so they prefer to stay with them. Christians will mostly live with host communities.”

Bature said that camps in Borno where there is the presence of major international organizations and state actors are more organized. Food is given out to the displaced and there are opportunities for medical care and education.
“Living in a camp is not always very easy. You have a lot of difficulties. Sometimes the supplies are short,” he said.

In other camps where there are no international actors present to provide humanitarian support and entrepreneurial training opportunities, Bature said, displaced persons are essentially living in poverty.
“They suffer and they just live from day to day hoping that some help comes to them,” he said. “Those are the kind of camps who still need help.”