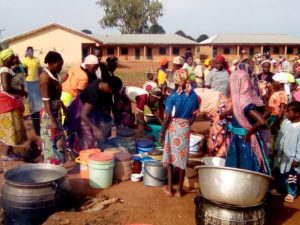 Internally displaced people in the Rimau village of Kajuru Local gGovernment Area in the Kaduna state of Nigeria cook food that was donated to them on May 25, 2020. | Peter Jonathan

By Samuel Smith, CP Reporter
Armed Fulani herdsmen attacks on farming villages in the Kaduna State of Nigeria have continued as reports suggest that at least 20 people were killed in a series of attacks last week.

The National President of the Adara Development Association, Awema Maisamari, announced last Friday that four days of attacks from May 18 to May 22 targeting several villages in the Kajuru Local Government Area have led to the deaths of at least 20 people.

The Adara, a majority Christian people group, is one of the largest ethnic groups in southern Kaduna.
“As of [last Friday afternoon]20 persons have been killed, several others are either injured or missing,” the Adara Development Association head added.

Maisamari said the “traumatized community members are reeling in pain” and “wondering why this contrived anarchy is still being condoned by the powers that be.”

“Since January, killings, maiming, burning, looting and kidnapping have continued unabated from village to village,” he said. “There have been 63 terrorist attacks and kidnapping incidents, more than 107 people killed, about 49 persons injured, more than 66 men, women and girls abducted for ransoms, more than 111 houses burned. Thirty-two villages were destroyed and 20,000 persons displaced, especially in the last two weeks.”

Kajuru resident Alheri Magaji, who leads the nonprofit Resilient Aid and Dialogue Initiative and is the daughter of the current leader of the Adara Chiefdom, told The Christian Post on Tuesday that she has heard of at least five people who were killed in the latest round of attacks in Kajuru.

She said that as many as 4,000 people are internally displaced in the Kallah district in Kajuru following the last spate of attacks.

“They are literally ones with nothing to eat tomorrow,” she said. “I’ve been trying to make a few calls to see what we can raise for them.”

According to data that was shared with her by a source on the ground in those districts, as many as 78 people were injured in attacks carried out between May 19 and May 24 in which over 600 houses were burned.

While there have been five deaths that her sources know of, she said, there could be many more deaths that are not yet known because the continued presence of Fulani radicals in some villages has prevented community members from going back to count the dead.

According to the data provided to Magaji, there are at least 51 people missing in Kajuru as a result of the last round of attacks.

Similar figures that match up with the data provided to Magaji were reported by SaharaReporters.com. In a report, the website stated that five people were killed and at least 78 people were injured when suspected Fulani radicals attacked the villages of Idazau, Etissi, Bakin Kogi, Dutsen Gora, Ungwan Gora, Pushu Kallah and Magunguna during the five-day stretch.

The news outlet further reports that a Catholic church and two evangelical churches were said to have been destroyed as a result of the attacks.

The attacks follow a series of earlier massacres said to have been carried out by Fulani radicals in the Kajuru local government area earlier this month that killed over 20 other people.

In an overnight attack carried out on the Gonan Rogo village on May 11 and May 12, no fewer than 17 people were said to have been killed.

Attacks launched by Fulani radicals against farming communities in Kaduna are nothing new.
Last year, dozens of people, if not hundreds, were killed and many displaced when suspected Fulani herders attacked in the Kaduna state.

The attacks led some in the Adara community to travel to Washington, D.C., last year to spread awareness of their story.

“We came to the United States last year to talk about how these attacks are happening. And they haven’t really stopped,” Magaji told CP.

After the attacks against Kaduna villages last year, Magaji said that as many as 12,000 people were displaced from their homes.

But now, she says there are over 30,000 displaced people in Kujuru. She said most of them are living with friends or family members but some have been forced to sleep under trees or in uncompleted buildings. Some, she said, have returned back to their villages.

Across the farming-rich Middle Belt of Nigeria, attacks by radicals from the predominantly nomadic and predominantly Muslim Fulani herding communities have targetted predominantly Christian farming villages in recent years.

As a result, thousands of people have been pushed out of their houses and off their farms.
Estimates from the nongovernmental organization International Society for Civil Liberties and Rule of Law suggests that Fulani radicals are responsible for killing as many as 470 people in the first four-and-a-half months of 2020 and thousands of people in recent years.

Some international human rights groups have warned of the genocidal conditions facing Christians in Nigeria.

The U.S. State Department listed Nigeria in December on its “special watch list” of countries that engage in or tolerate severe violations of religious freedom due to the “lack of effective government response and the lack of judicial cases being brought forward in that country.”

Open Doors USA ranks Nigeria as the 12th worst country in the world on its 2020 World Watch List that tracks incidents of Christian persecution.

As thousands are displaced, Magaji told CP that the local government in Kajuru has banned “anybody from forming a camp” since last year.

“Normally, when attacks happen, the people normally go to government-owned places so the government feeds them at least,” she said. “But the government shut all the camps down. Even the IDPs that gathered in a primary school in Kajuru, the chairman of the ward said that they should leave the place and anybody caught there would be arrested because the government has displaced people.”

“It is ridiculous because right now we have thousands of people displaced who are being fed by kind-hearted people,” Magaji continued. “There is literally a humanitarian crisis.”

Magaji said the local government chairman recently accused her and other Adara advocates of lying about the attacks that happened in Gonan Rogo earlier this month.

She accused the government of “trying to change figures” to make it look like what has developed in Kujuru in recent years is a continuation of a decades-long “Fulani-herder conflict.”

She said a contact who works for a Nigerian security agency told her that “they are trying to reduce the number of attacks they put into the [database]so that it looks like there is an equal number of fatalities and injuries and all that.”

“They are underreporting the attacks on Adara,” she claimed. “The scale of the IDPs and attacks is so huge. You can’t support the [government]argument with figures on the ground. But that is not going to work because there are people on the ground taking pictures. They are really just making fools of themselves.”
• https://www.christianpost.com/news/20-christians-killed-others-injured-missing-fulani-attacks-displaced-20000.html?uid=*|UNIQID|*