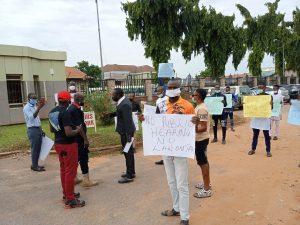 Protesters with placards at the entrance to Delta State House of Assembly insisting on Public hearing on the new tax law bill being considered by the Assembly.

A coalition of Chairmen and members of several Civil Society groups in Delta State today stormed the gates of the Delta State House of Assembly Complex, calling on the House to ensure public hearing on a bill for a law to establish the Delta State Internal Revenue Service and its Board and other matters connected therewith.

The group led by the Director General, Conference for the Actualisation of Human Rights, Barrister Omes Ogedegbe, urged the State Parliament to take a cue from their federal counterparts who halted the accelerated process of the bill on infectious diseases upon public outcry for failing to conduct a public hearing.

According to them, inherent in the bill are provisions that empower the executioner of the law to invade the houses and properties of Deltans for the purpose of carrying out assessments.

The protesters lamented that the House of Assembly was fast losing its honour for passing, in just one sitting the Delta State Public Procurement Bill.

“We must wake up and be vigilant otherwise these current Assembly men would be a tool for smuggling of obnoxious laws into our polity. Deltans must rise up to demand that the bill be suspended until the atmosphere is ripe for same to go through Public Hearing., the statement read.

The Deputy Speaker, Rt. Hon. Ochor Ochor, who was on ground to receive the statement of the protesters, said he would communicate the letter to the House even as he assured them of the House commitment to due process.