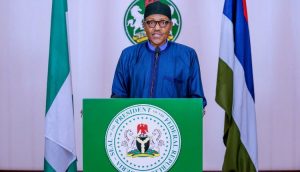 The lockdown in Lagos, Ogun and the Federal Capital Territory as a result of the COVID-19 pandemic is to be extended by another 14 days effective 11: 59 pm Monday, President Muhammadu Buhari has directed.

He also directed ministers to develop a comprehensive policy for the Nigerian economy functioning with COVID-19.

In a nationwide broadcast today, Monday, May 18, 2020 the president said that “having carefully considered the briefings and report from the Presidential Task Force and the various options offered, it has become necessary to extend the current restriction of movement in Lagos and Ogun States as well as the FCT for another 14 days effective from 11:59 pm on Monday, 13th of April, 2020. I am therefore once again asking you all to work with Government in this fight.”

While admitting that it was a difficult decision to take, he said he was convinced that it was the right decision, because the evidence in support of such an action was clear.

He said the cessation of movement, physical distancing measures and the prohibition of mass gatherings remained the most efficient and effective way of reducing the transmission of the virus, adding: “ By sustaining these measures, combined with extensive testing and contact tracing, we can take control and limit the spread of the disease.

“Our approach to the virus remains in two steps – First, to protect the lives of our fellow Nigerians and foreign residents living here and second, to preserve the livelihoods of workers and business owners”.

He however, directed the Ministers of Industry, Trade and Investment, Communication and Digital Economy, Science and Technology, Transportation, Aviation, Interior, Health, Works and Housing, Labour and Employment and Education to jointly develop a comprehensive policy for a “Nigerian economy functioning with COVID-19”.

“The Ministers will be supported by the Presidential Economic Advisory Council and Economic Sustainability Committee in executing this mandate. I am also directing the Minister of Agriculture and Rural Development, the National Security Adviser, the Vice Chairman, National Food Security Council and the Chairman, Presidential Fertiliser Initiative to work with the Presidential Task Force on COVID-19 to ensure the impact of this pandemic on our 2020 farming season is minimized.”

“This is not a joke. It is a matter of life and death. Mosques in Makkah and Madina have been closed. The Pope celebrated Mass on an empty St. Peter’s Square. The famous Notre Dame cathedral in Paris held Easter Mass with less than 10 people. India, Italy and France are in complete lockdown. Other countries are in the process of following suit. We cannot be lax,” the president said.

Pointing out that guidelines previously issued on exempted services would remain, President Buhari said that the repercussions of any premature end to the lockdown action were unimaginable, adding that “we must not lose the gains achieved thus far. We must not allow a rapid increase in community transmission. We must endure a little longer.”

He urged individuals to notify the relevant authorities if they or their loved ones develop any symptoms, and promised to ask the nation’s health care professionals to redouble their efforts to identify all suspected cases, bring them into care and prevent transmission to others.

The president also expressed concern about the increase in number of confirmed cases and deaths being reported across the world and in Nigeria, specifically.

The president noted that no country can afford the full impact of a sustained restriction of movement on its economy. He said he was “fully aware of the great difficulties experienced especially by those who earn a daily wage such as traders, day-workers, artisans and manual workers”.

He noted that for this group, their sustenance depends on their ability to go out. Their livelihoods depend on them mingling with others and about seeking work. “But despite these realities we must not change the restrictions,” the president said.

President Buhari recounted that in the past two weeks, the government announced palliative measures such as food distribution, cash transfers and loans repayment waivers, which were aimed at easing the pains of the restrictive policies during this difficult time. These palliatives will be sustained, he promised.

This he said will support an additional one million homes with the social investment programmes, saying a technical committee was working on this and would submit a report to him by the end of this week.

According to him: “The Security Agencies have risen to the challenges posed by this unprecedented situation with gallantry, and I commend them. I urge them to continue to maintain utmost vigilance, firmness as well as restraint in enforcing the restriction orders while not neglecting statutory security responsibilities.”

He commended the Governors, for impressive responses, especially in aligning their policies and actions with those of the Federal Government.

“In the coming weeks, I want to assure you that the Federal Government, through the Presidential Task Force, will do whatever it takes to support you in this very difficult period. I have no doubt that, by working together and carefully following the rules, we shall get over this pandemic.

“I must also thank the Legislative arm of Government for all its support and donations in this very difficult period. This collaboration is critical to the short and long-term success of all the measures that we have instituted in response to the pandemic,” Buhari said.

He also acknowledged the massive support from traditional rulers, the Christian Association of Nigeria (CAN) and the Nigerian Supreme Council for Islamic Affairs (NSCIA) during this pandemic, while also acknowledging the support and contributions received from public-spirited individuals, the business community and international partners and friends.

He also commended the media organisations, celebrities and other public figures for the great work they are doing in sensitizing citizens on hygienic practices, social distancing and issues associated with social gatherings.

The President also thanked the members of the Presidential Task Force on COVID-19 for all their hard work so far, adding that their patriotism is exemplary and highly commendable.

“As a result of the overwhelming support and cooperation received, we were able to achieve a lot during these 14 days of initial lockdown.

“We implemented comprehensive public health measures that intensified our case identification, testing, isolation and contact tracing capabilities.
He announced that Nigeria has identified 92% of all identified contacts while doubling the number of testing laboratories in the country and raising our testing capacity to 1,500 tests per day.

The country has also trained over 7,000 Healthcare workers on infection prevention and control while deploying NCDC teams to 19 states of the federation, the president said.
“Lagos and Abuja today have the capacity to admit some 1,000 patients each across several treatment centres.

He also noted that any State Governments had made provisions for isolation wards and treatment centres, noting that the government would also build similar centers near our airports and land borders.
“Using our resources and those provided through donations, we will adequately equip and man these centres in the coming weeks. Already, health care workers across all the treatment centers have been provided with the personal protective equipment that they need to safely carry out the care they provide,” he said.

President Buhari expressed hope and prayed that Nigerians do not have to use all these centres, adding that the nation will be ready for all eventualities.

The President also lauded the incredible work being done by Nigeria’s healthcare workers and volunteers across the country, especially in frontline areas of Lagos and Ogun States as well as the Federal Capital Territory.

“You are our heroes, and as a nation we will forever remain grateful for your sacrifice during this very difficult time. More measures to motivate our health care workers are being introduced which we will announce in the coming weeks.

Buhari said that in the coming weeks, the Federal Government, through the Presidential Task Force, would do whatever it takes to support Nigerians in this very difficult period.