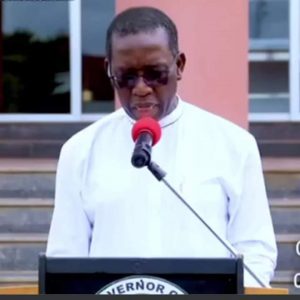 Delta State has emerged the second least poor state in the country, according to the Nigeria Bureau of Statistics (NBS).

The bureau, in its latest Poverty Index Report, ranked Delta second after Lagos among the states with low poverty rate, and said that 40.1 per cent of Nigeria’s total population was poor.

According to it, an average of four out of 10 individuals in Nigeria have real per capita expenditures below N137, 430 per year, meaning that monthly income of an individual in this category is less than N11,500 while income per day is N383.03.

The report said: “Lagos State has 4.50 per cent poverty head count rate and closely trailed by Delta with 6.02 per cent.

“The report translates to over 82.9 million Nigerians considered as poor by national standard.”

In his reaction, Commissioner for Information in Delta, Mr Charles Aniagwu, on said in Asaba that the report was a reflection of the “Prosperity for all Deltans’’ agenda being vigorously pursued by the Gov. Ifeanyi Okowa administration.

He also stated that due to the enabling investment climate created by the Okowa led government, particularly in oil bearing communities, Delta had been one of the highest revenue earners from Federation Accounts Allocation Committee (FAAC), which also indicated that the state government had been putting into judicious use the monies accrued to the state.

Aniagwu thanked the NBS for conducting living standards survey 10 years after the last one and for using consumption expenditures approach in measuring poverty in Nigeria rather than income approach.

According to him, conceptually, consumption expenditures better reflect the achievements of a particular level of welfare by a household, while income represents the opportunity of reaching a certain level of well-being.

“This particular survey, conducted with support from the World Bank, recorded a clear departure from the previous exercises, especially in the area of methodology where the consumption expenditures approach was adopted.

“With the new national poverty line at N137, 430 or $361 per person per annum, which translates to $0.98 per day and captures about 40 per cent of the total population, it shows considerable improvement over the years.

“In the last couple of years Delta has remained one of the highest earners in the country in terms of crude oil revenues due to the peaceful relations between International Oil Companies IOCs and host communities.

“The Okowa administration in his first tenure promised Deltans prosperity for all and in his second term he said he would build a stronger Delta in terms of the economy, projects and of course, peaceful relations.

“The NBS rating is a pointer to the fact that Delta’s resources have been put to judicious use by the Okowa-led government thereby reducing poverty to a level that we can boldly say that we are working.

“Our desire as a state is to come top in the country and also further improve the standard of living of Deltans in line with best global standards,” he stated.

The report indicated that Sokoto, Taraba, Jigawa, Ebonyi, Zamfara, Yobe and Adamawa lead the poorest states in the country.

The survey is used to measure prevalence of poverty and to estimate a wide range of socio-economic indicators, including benchmarking of the Sustainable Development Goals (SDGs).