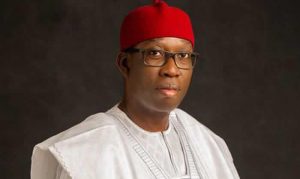 Delta Governor, Sen. (Dr) Ifeanyi Okowa, today, Friday May 29, 2020 expressed optimism that as the world continued to battle the coronavirus pandemic, God would take away the challenge and revive the state and nations’ economies.

He stated this at an interdenominational thanksgiving service to mark the first anniversary of his second term in office at the Government House Chapel, Asaba.

The governor said that COVID-19 had posed a major challenge to economies of the world and called on Christians to pray fervently to God for a solution to the scourge.

He disclosed that the global lockdown occasioned by the pandemic had led to slump in the price of crude oil, which had remained Nigeria’s major source of revenue.

Okowa, however, said that with God, there would be victory over the pandemic, and called on the people to put their trust in God for a solution to the challenge and other turbulent situations.

He recalled a media publication where he was mocked for his daily fellowship with God, and said that rather than dampen his spirit, the publication strengthened him in his belief and trust in God.

According to him, at that point, I knew that the battle of my re-election was over because I saw the publication as a challenge to God, not mine, and of course, the rest is history because I won the election more convincingly than in 2015.

The governor said that the thanksgiving was, therefore, necessary because God made it possible for him and his deputy to emerge victorious in the election.

“We thank God for making it possible for us to gather here today; if not for the season that we found ourselves, I am sure that by now we would have been at the Event Centre with many gospel artistes coming to perform for us while we dance to glorify the name of God.

“I thank the Chaplain and his assistant for being able to arrange the Chapel in such a manner that we are able to obey the rules of the state regarding COVID-19 protocols.

“It’s unfortunate that all of us cannot worship the way we desire, but for those of us who are able to gather together and are able to call on the name of the Lord, He will answer us.

“For those who are at home praying and giving God glory for this day as we celebrate our first year in the second term and the fifth year in office, we give God glory for their lives, he said.

Quoting from some verses in the Bible, the governor said “it is necessary that we continue to praise the name of the Lord our God, because when He fights for us we shall hold our peace.

“In the last five years, the Lord has continued to fight for us and I am a witness to all the things He has done; even for the challenge that we have at the moment, we will continue to trust in His name.

“He fought for us in the 2019 elections; there were all manner of speculation and all things were said and I still remember a publication somewhere that `he goes to church every day, he goes to chapel every day, let’s see if the Chapel and the church will deliver him in the election’.

“Whenever I remember that publication, I have all reasons to give God the glory more.

“We will continue to trust in the name of God because we can never be wrong when we trust in Him and that’s why I give God glory that He gave us the opportunity to worship God today.

“The Lord has always been there for us even in trying times. We all are wearing face masks because of the pandemic, and we may be wearing this for three months or even one year but only God has the answer to this challenge.”

According to him, everybody is rushing to find the vaccine but it is only when God permits that the vaccine will come because He is the one that gives us power to have knowledge to solve life’s challenges.

“The Lord has led us thus far these five years and we must recognise that it is the Lord that made it possible and I want to urge us to continue to call on the name of God because He is ever faithful.’’

He noted that Nigeria’s economy was negatively impacted by the effect of COVID-19 because of its dependence on oil revenue, saying “we produce oil now and there is nobody to buy and the prices have crashed because the world is sitting at home.

Okowa added that there were some targets his administration had been hamstrung in attaining because of the pandemic, but expressed confidence that “even in this economic challenge, the Lord will turn things around and the things we planned to do we shall accomplish them together in the name of Jesus.”

He thanked God for a peaceful and united Delta in the last five years, especially among the various arms of government.

On security, the governor said the state had recorded some security challenges but assured that the new security outfit – Operation Delta Hawk – currently being established by the state government would stem the challenges.

In his sermon, “I know my redeemer liveth”, Assistant Chaplain of the Chapel, Pastor Matthew Ezedom, said it was important to give God thanks because “it is God that protects all’’.

Quoting Job 19:25,which states: “I know that my Redeemer lives, and He shall stand at last on the earth,” he urged Christians to always put their trust in God, saying “He alone can keep us away from all evil’’.

Obasanjo urges Buhari not to run in 2019