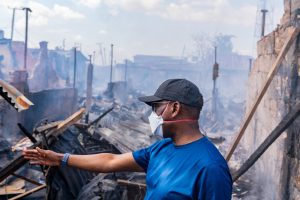 Governor Ifeanyi Okowa examines a burnt portion of the market.

The popular Ogbeogonogo Market in Asaba went up in flames this morning, causing extensive damage and traders losing much of their wares to the inferno.

Governor Ifeanyi Okowa of Delta has commiserated with victims of the fire that gutted a section of the Market.

The section affected by the early morning inferno houses shops for food stuff, clothes and fashion as well as livestock and butchery. Goods worth hundreds of millions of naira were reportedly lost to the fire.

The governor, who visited the market to inspect the extent of damage by the inferno, assured that the state government would assist the traders affected to get back to their businesses.

He told newsmen that the cause of the fire was still being investigated and assured that the government would liaise with Oshimili South Local Government Council to rebuild the market to modern standards.

“I have just finished inspecting the burnt section of the Ogbeogonogo market here in Asaba; there was a fire incident in the market this morning but it is the old market that was affected and the new section was not affected.

“It is obvious that a lot of persons have been affected because we saw that virtually all the stores in that section have totally been brought down by the fire.

“I commiserate with those who lost their goods to the unfortunate fire incident and as a government we will do everything possible to assist them.

“I cannot ascertain the number of stores now but there are quite a number and I have directed that the chairman of that section of the market should be able to get to us the documentation of those who own shops in that market.

“We will also cross check with the documents of the local government council so that we know how to offer assistance in terms of palliative to enable them get back to business.

“But apparently, they have been very badly affected, but we thank God for the intervention of the state’s Fire Service; it could have been worse.”

“That place is actually very congested and I am sure that if not for the intervention of the fire service, the fire would have done a lot of damage not only to the main market but to very many other private stores that are in existence in that place.

“The cause of the fire is not yet known because I did ask questions. However, it has happened and it is for us to be able to find a way to provide assistance to those who have been impacted very badly by the incident.

“The main market which was built by the state government was handed over to the local government council.

“Apparently, the oldest section of the market did not follow any real patterns or rules and so I will have to discuss with the local government council and thereafter give appropriate directives on what ought to be done,” he stated.

Earlier, the Commissioner for Information, Mr Charles Aniagwu and his counterpart in charge of Bureau for Special Duties, Mr .Mofe Pirah, had described the incident as unfortunate.

Sympathisers at the scene of the fire, urged the government to reconstruct the affected section of the market.

Trump speaks of China virus in farewell speech; ‘it’s horrible, we know where it came from’

PERSPECTIVE – Idumuje-Ugboko crisis: Ifejokwu and the burden of guilt