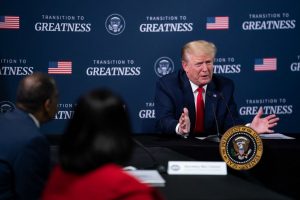 By Leonardo Blair, Christian Post Reporter
President Donald Trump says he wants churches to reopen as quickly as possible as they are so important to the “psyche” he believes if they remained closed in the wake of the coronavirus pandemic “you’ll break the country.”

“We want them (churches) to reopen. I mean literally, I just got off the phone with CDC and I talked about churches. I said, ‘I want the churches to open.’ And the people want the churches to open, and I think you’ll have something come down very soon from CDC. We want to get our churches back and our country is coming back,” Trump told reporters during a round table meeting of African American leaders in Michigan Thursday.

He said while statewide shutdowns which began in March helped prevent up to 2.5 million people from dying, “it’s time for our country to open again.”

“I think they are being forced to open, frankly. The people want to get out. You’ll break the country if you don’t. And I think they look at it as a possible November question. It’s not a November question, it happens to be very bad for them,” he added, alluding to the upcoming general election.
When asked if he was prioritizing the reopening of churches over other establishments, Trump explained that he believes the work of the church is “essential.”

“Churches, to me, they are so important in terms of the psyche of our country. Beyond to me, I think they use the word essential. Churches are essential. People want to be in their churches. It’s wonderful to sit home and watch something on a laptop but it can never be the same as being in a church and being with your friends,” he said. “They want to have it opened and I think that’s going to be happening very shortly, very, very shortly. So that (CDC guidelines) will be put out maybe tomorrow. Maybe today.”

A senior White House Official told NBC News that guidelines for the reopening of places of worship have been cleared by the White House Counsel’s Office and they include recommendations such as wearing gloves while distributing Holy Communion, social distancing and holding virtual services as a last resort.

While the majority of churches nationwide followed orders to suspend in-person worship services as the coronavirus pandemic has killed more than 90,000 people and infected more than 1.6 million in the U.S., a vocal minority of churches have challenged the orders as First Amendment violations.

Some churches, even though they complied with state orders and reopened when they were told it was safe to do so, have been forced to shut down again as they registered cases of coronavirus infections in their congregations.
• Source: https://www.christianpost.com/news/president-trump-warns-of-broken-america-if-churches-arent-reopened.html

PERSPECTIVE – Thompson Usiyen and Oyarikhua: Heroes of a country in amnesia