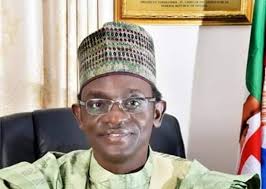 By Deji Abdulwahab
The new Caretaker Committee Chairman of APC, Mai Mala Buni, has pledged to do justice to every party member and ensure the ensure the current challenges were amicably resolved.
Buni, also the Governor of Yobe, made the pledge on Thursday while speaking with newsmen in Abuja.
The News Agency of Nigeria (NAN) reports that the APC National Executive Committee (NEC) had on Thursday dissolved the party’s National Working Committee (NWC).
It set up Gov. Buni-led Caretaker Committee to organise a National Convention that would reset the party.
The decision was taken at an emergency meeting of the party’s NEC held at the Presidential Villa, Abuja.
Other members of the caretaker committee and extra-ordinary convention planning committee, include: Gov. Gboyega Oyetola of Osun (South-West), Sen. Ken Nnamani (South-East), Stella Okorete (Women Representative).
Other members are: Gov. Sani Bello of Niger (North-Central), Dr James Lalu for the physically challenged, Sen. Abubakar Yusuf (Senate Representative) and Rep. Akinyemi Olaide, representing House of Representatives.
David Lyon (South/South); Abba Ari (North-West); Prof. Tahir Mamman (North-East); Ismail Ahmed (Youth Leader) and Sen. Akpan Udoedehe as the Committee Secretary.
Buni, also a former APC National Secretary, described the committee as a capable team to deliver the job.
“After being two-time national Secretary of the party, I can say, I know the party very well.
“I want to assure every APC member that we will do justice to every one, because we have a capable team.
“I am a team player and am here to manage a crisis, and if you do not manage crisis, crisis will manage you.
“So, without justice, there will be no peace; so, am ready to do justice to every APC member,” the chairman said.
According to him, NEC is the highest organ of the party, except the convention, and NEC can function for convention in-between, so any decision taken by NEC is the final decision.
“NEC has directed that every member in court should withdraw his suit.
“Party will carry all members along, especially the leaders of the APC.
“Many of them have paid their dues to the party, so we will carry them along,” Buni said.
In a related development, the APC State Chairmen Forum has lauded the party NEC for dissolving the NWC, saying that NEC resolution would go a long way in ending the crisis rocking the party.
Its Publicity Secretary, Alhaji Lawal Liman, also lauded the NEC decision, directing party members that instituted court cases against one another to withdraw the suits. (NAN)