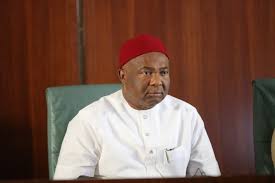 When on a Friday evening the news broke that the Imo State Governor, Hope Uzodinma, had just assented to the Bill repealing the Imo Governors and Speakers Pensions and Privileges Law No. 5 of 2007 in his state, initial feelings that crept through me were those of disbelief, surprise and shock. The fear that the governor may have just committed a costly political blunder and acted in ignorance took over my thoughts, and I believe I am not alone in this.

It is obvious that Sen Uzodinma has embarked on a collision mission to strip his national mentors and political allies their rights of pensions in their states which have been like their States’ monthly special recognition and appreciation of the services they rendered.

Some of those who may henceforth forfeit their pensions rights include President Muhammedu Buhari when he leaves office in 2023, Asiwaju Ahmed Bola Tinubu of Lagos State, Comrade Adams Oshiomhole of Edo, Chibuike Amaechi in Rivers, Barr. Raji Fashola of Lagos, Obong Godswill Akpabio of Akwa Ibom, Chief Timipre Silva of Bayelsa, among others.

These former Governors who are now of the same APC with Sen. Uzodinma would henceforth live with the moral burden of continuously collecting pensions from their states as former governors, when one of their own is currently celebrating the feat of abolishing that same law in his own state.

My personal investigations into the Pensions Act of former Governors, their Deputies Speakers and Deputy Speakers in Imo state showed that the law was put up by the Imo House of Assembly under the administration of the former governor, Achike Udenwa. The law stipulates a total amount of cash as low as N500,000 for a former governor and N300,000 for a former Deputy Governor on a monthly bases from where they take care of their domestic staff and fuel their vehicles as people who served their states.

My research also shows that Imo state, among all the States in the entire South-East was the only state with the lowest amount of Pensions payable to their former leaders in the abolished categories. It’s on record that some of these former leaders barely can feed themselves today in Imo state.

So, when a governor, who desperately seeks legitimacy and yearns for masses’ recognition goes on a mission of sheer populism without due consultations and sound political calculation, what you often have is catastrophic explosion.

First, blame goes to the Imo State House of Assembly and its extremely lousy leadership that received this Bill from the governor as an Executive Bill, and passed it overnight without subjecting it to all due legislative processes.

How could the Speaker, Mr. Chiji Collins, have allowed a Bill to be presented to him on Thursday night and by Friday noon, his House had passed it through the First, Second and Third readings, and the governor signed it into law same night, without allowing critical input into its merits and demerits? What was the rush for and whose interest was this meant to serve?

Let’s assume that Uzodinma is seeking to impress the public, using this action as his post-Covid-19 palliative; but of what impact is the sum total of the Pension sum of these former leaders that amounts to less than N2m monthly make in a state where the governor has appointed over 24 commissioners and over hundred Special Assistants and Senior Special Advisers, many without portfolios, and yet are on monthly salaries?
Shouldn’t the governor have pruned down the population of his aides and suspend his recent car gifts to Permanent Secretaries and Judges who annually receive such similar quality gifts?

Sen. Uzodinma has just unwittingly showed incompetence and cluelessness through this rushed populist political action. It seems to me obvious that somebody was in a hurry to avenge somebody without first weighing and considering the wider implications of his vindictive action.

If he was so desperate to deny himself of his own pensions after office, could he not have made the law for himself without including others, as a way of leading the light and living by example? How did he not consider that not all in that category today in his Imo State are able to maintain their lone cars and attend to their medical expenses through that monthly stipend?

However, my honest guess is that a governor who got into office through some questionable means, a governor that was already in the waiting list of the EFCC over alleged diversion of Federal Government’s contract monies may have already acquired so much for himself and his future generations that he would not need any monthly pensions’ stipend to live a good life after office. Unfortunately, not all had the opportunity to seize money made available to his companies for federal projects and still walk the streets free and even cleared to contest elections.

Uzodinma should have just boldly gone after his perceived target (if any), than taking this unfortunate cloudy route whose only consequences would be to generate tension in a state that is struggling to survive an eight-year brutal plundering and subjugation under the tyranny of Rochas Okorocha. This is deliberate ingratitude to former leaders who served the state with all that it pleased God to endow them with. That monthly stipend may just be about the only sum with which they look after themselves, their families, and staff and meet their monthly bills.

If Sen. Uzodinma who spent a total of eight years in the Senate of the National Assembly; a Senator of the Federal Republic of Nigeria who understands perfectly how laws are repealed and made, could go this far in manipulating the Imo House of Assembly into passing a Bill without the due legislative processes, just to achieve his yet to be disclosed selfish vindictiveness, then let it be known that democracy has finally died in Imo State and injustice now rules the waves in that tortured and unhappy state.

• Thed. J. Agidi (Ph.D) writes from the University of Abuja and can be reached through email: treadures@gmail.com