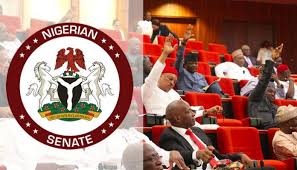 The Senate has confirmed the nominations of 42 Ambassadors-designate presented by President Muhammadu Buhari, for approval as Ambassadors to Nigerian foreign missions. So far, no nomination yet from Delta State.

The confirmation of the nominees at plenary on Thursday, followed a presentation of the report of the Committee on Foreign Affairs through its Chairman, Sen. Bulkachuwa Muhammad, and consideration of same at the committee of the whole.

President Buhari had in a letter addressed to President of the Senate and read on May 12, at plenary sought the confirmation of the Senate for appointment of 42 nominees as career ambassadors to Nigerian foreign missions.

“Matin Adamu (Plateau); lbim Charles (Rivers); Zachariah lfu (Taraba) and Bukar Hamman (Yobe).
The News Agency of Nigeria (NAN) reports that the upper chamber also confirmed the nomination of Justice Monica Mensem, as the President of the Court of Appeal.

The confirmation followed a presentation of the report of the Senate Committee on Judiciary, Human Rights and Legal Matters.

The Chairman, Sen. Michael Bamidele, presented the report and it was considered at the senate committee of the whole.

It was also considered by same committee of the whole.
In his remarks, President of the Senate Ahmad Lawan said, “at the moment, many of our embassies don’t have the ambassadors or high commissioners.

“I will, therefore, urge the Ministry of Foreign Affairs, to ensure they process the postings as quickly as possible.

“We need to have our interest protected in those countries. We have very strategic reasons why we should be represented properly in some of these countries.

“The absence of the ambassadors and high commissioners makes it difficult for a proper representation or even dispatches to the fatherland.(NAN)

Saraki on solidarity visit to Gov. Emmanuel of Akwa Ibom

Nobody will read my biography because of my past, says IBB