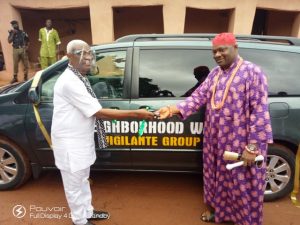 Ezi monarch, Obi Mohayem 1, receiving the key to the security vehicle donated by his subjects for neighbourhood watch.

Twenty prominent sons of Ezi Kingdom in Aniocha North Local Government Area of Delta State have donated a new Sienna bus and communication gadgets for security operations in the Community.

The Vehicle and the Communication gadgets were formally presented to the traditional ruler of the community, His Royal Majesty, Agbogidi Obi Mohanyem 1, Obi of Ezi on Saturday July 4th, 2020, by Engr. (Dr.) Ogwugwuam Ezeagwu on behalf of the donors in a brief, but impressive ceremony

Responding to the gesture, the Ezi monarch, Agbogidi Obi Mohanyem 1, expressed his joy and appreciation to the donors observing that for many years, the community was on red alert in the state because of the activities of criminal elements, especially kidnappers, noting that Ezi as a community has had over 12 kidnap cases not too long ago

“At a point the former Commissioner of Police in the State had to station his term at the border between Ezi and Onicha-Olona.

“For my people to come together to put a stop to the ugly incidents, I must applaud them. They are the reason for my success as a king and without them I would not have been here. I am so proud of them

“For whoever that has initiated this move, may God perfect and protect his home. For those that donated, their pockets will never run dry. God in his infinite mercy will protect them and their homes. Ezi as a community will never experience any ugly incident of kidnapping again,” the highly respected royal father prayed and said that the community will continue to remain law abiding and support the policies and actions of the Federal, State and Local Governments.

Obi Mohanyem however, reported two cases of missing persons in the community and called on the divisional police officer in charge of Onicha-Olona division to use his office to do the needful, even as he passionately appealed to the relevant authorities in the state to come to the aid of Ezi Community, by way of completing the Ezi end of Issele-Uku/Issele-Mkpitime/Onicha-Olona/Ezi road.

Highpoint of the Ceremony was the commissioning of the Security Vehicle and the Communication gadgets by the Executive Chairman of Aniocha North Local Government, Hon. Chuks Oseme and handing over to Ezi Neighborhood Watch by His Royal Majesty Agbogidi Obi Mohanyem 1. 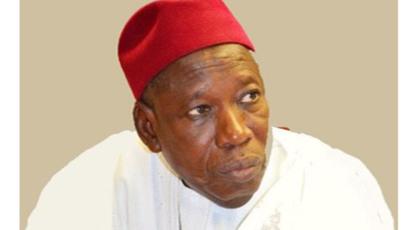