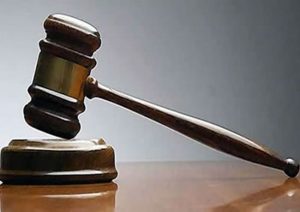 The Magistrate, Mrs Folake Ogundele, sentenced Ayokanmi after he pleaded guilty to a charge of impersonation.

Ogundele sentenced the convict without an option of fine.
Earlier, the Prosecutor, Inspector Fortune Akhenegor, had told the court that the defendant committed the offence on July 16 at Federal High Court, Abeokuta.

Akhenegor said that the defendant unlawfully presented himself as legal practitioner.
He said that the convict went ahead to move an application for bail for a matter he appeared in as a counsel at the Federal High Court in Abeokuta.

“The judge found fault in his address to the court which made the judge to interrogate him.
“He later confessed that he only had a diploma in law and had never been called to the Bar.
“He confessed that he had been using his wife‘s gown who was called to Bar in 2006, but not practising.

”The defendant has been practicing since 2007,” he said.
Akhenegor said the offence contravened Section 484 of the Criminal Law of Ogun, 2006.

The objective of CNM, by Obasanjo (FULL TEXT)