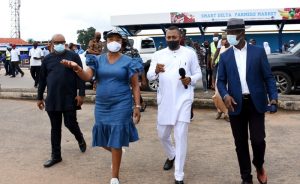 The Governor of Delta, Senator (Dr) Ifeanyi Okowa on Wednesday, reaffirmed that his administration would continue to provide an enabling environment that would stimulate business growth and development in the state.

He gave the assurance while inspecting facilities at the new Asaba Market located at Oko Junction, along Benin/Asaba Expressway in Asaba.

The governor who was represented by the Commissioner for Power and Energy, Mr Basil Ganagana, said that the decision to relocate the traders from “Abraka’’ area in Asaba, to the new place was due to security risks and attitude of traders who displayed their wares on the expressway.

He said that it was as a result of the state government’s sincere desire and commitment to create an enabling environment for traders to grow their businesses that his administration decided to put in place infrastructural facilities in the new Asaba Market.

While expressing satisfaction with what the Delta State Capital Territory Development Agency (DSCTDA) had done so far in the new market since traders were relocated there a few months ago, Okowa assured the traders that the access to the market would be tarred by the state government.

“My administration will continue to provide enabling environment that would stimulate business growth and development for business minded residents of the state to grow their respective businesses.

“I urged you (traders in the new Asaba market) to reciprocate the state government’s gestures by taking good care of basic facilities provided by the government in the new market.

“You should not allow criminally-minded persons to operate in the new market,” the governor added.

He appealed to the traders to continue to support the beautification effort of the DSCTDA in the area which, according to him, is in tandem with the urban renewal agenda of his administration.

Conducting the governor’s representative round the new and old market earlier, Director-General, DSCTDA,

Mrs Onyemaechi Mrakpor, said all traders in the defunct market now had shops in the new market, adding that land was allocated to different segments of traders in clusters to do their businesses.

Mrakpor pointed out that most of the traders were from the northern part of the country and that they sought refuge in Asaba from Anambra in 2016.

According to her, they were allowed to settle for business by Delta Government as part of its deliberate effort to integrate them into the state.

Mrakpor, however, expressed sadness that bad eggs among the traders turned the market to den of robbers.

She told the traders in the new market not to worry as customers would patronize them as soon as they knew that they had relocated.

In their separate remarks, the Senior Special Assistant to the Governor on Non-Indigenes, Alhaji Usman

Muktar and the Chairman of the New Market Committee, Alhaji Shuwa Adamu, thanked the Delta Government for providing a conducive environment for them to do their business.

Femi Kuti, others to perform at opening of 2019 AFCON