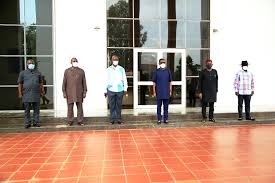 The Delta State Caucus in the House of Representatives has congratulated the people of Delta State on the 29th anniversary of the State, which was created in 1991.

In a good will message today, Thursday 27th August, 2020, signed by the Minority Leader of the House of Representatives, Rt. Hon. Ndudi Elumelu and the Chairman Delta State Caucus in the House, Rt. Hon. Victor Nwaokolo, the Caucus said: “God has continued to be good to us as a people since our creation as a state 29 years ago and we have every reason to appreciate the Lord for bringing us this far as one united, indivisible entity”.

They described the people of the State as unique, adding that despite their diversity in culture and ethnicity, they have continued to live together in peace and unity.

The Caucus commended the founding fathers of the State for laying a solid foundation and applauded the incumbent Governor, Senator Dr. Ifeanyi Okowa, for building on the foundation laid by them.

“Our dear State without doubt, has witnessed uncommon peace, unity and unprecedented infrastructural transformation in the last five years. Thanks to His Excellency, Senator Dr. Ifeanyi Okowa who has not only sustained the vision of our founding fathers, but has demonstrated determination and passion in building and expanding on the foundation laid by previous administrations in this state.

“As a people, our strength is in our diversity. Our coming together was designed by God for our common goals, aspirations and benefits. We should therefore continue to work and live in love and unity as a people with one destiny.

“Let us not take the peace, unity and love that has been existing among us for granted,” the Caucus admonished, adding that, as representatives of the people at the National Assembly, they will continue to join forces with the state Governor and other leaders at the various levels, to make the state the envy of others in the comity of States in Nigeria.

“We heartily congratulate Deltans on this auspicious occasion and pray for the good Lord to take us as a State to another level of Glory, where His Name will continue to be glorified,” the statement concluded.

Delta Govt to Ayiri Emami: What did you do with N800m you collected for Aruoton shoreline project?