Home Civil Right. Delta Fresh Vision calls on Deji Adeyanju not to dabble in an... 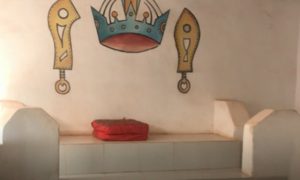 DELTA FRESH VISION watched with consternation the deployment of lies,propaganda and defeaning hate campaign against Prince Ned Nwoko,a Prince of Idumuje Ugboko clan in a Facebook live programme anchored by Deji Adeyanju,the covener of Concerned Nigeria Group on wednesday, the 26th of August,2020.
There is no iota of truth whatsoever in the sponsored lies that Prince Ned sequestered Idumuje land. The 90 hectares of land in question was duly applied for to build a Sports university and international golf course. The Idumuje-Ugboko land allocation committee duly approved the land with a proviso that Idumuje Ugboko retain 40% equity on the projects for the benefit of their children and those yet unborn.There is therefore no truth whatsoever that Prince Nwoko secured his land through intimidation,threats and arrests.
Deji Adeyanju is an activist whose name has resonated several times in”Our mumu don do” and in solidarity marches to release Sowore, the publisher of Sahara Reporters when the latter was incarcerated.We note his ordeal in the hands of his oppressors who inflicted bodily harm on him,a situation that made him seek medical attention in Dubai. The point to make here is that Deji should remain in his lane and not dabble into complicated community squabbles which about eight high powered peace committees had tried to settle without success. Those who are sending Deji messages to address the Kinship tussle in Idumuje- Ugboko are hypocrites whose aim is to arm twist the hands of the law and further complicate the crises in the community.There are people in Idumuje Ugboko who have been charged for murder including Prince Nonso Nwoko, the self acclaimed Royal Father of the village.
To refuse to address the real issue and begin to address a land issue genuinely procured with good intentions smacks of hypocrisy, malice and ingratitude. The records of Prince Ned’s vindication is in the custody of the Police and anyone who cares should go there to find out the truth. Recently the Delta Police Command also interrogated Prince Nonso Nwoko over lingering murder charges hanging on him since 2017.The evidences are in police custody for anyone who cares to find out the truth.
The ordeals of Prince Nonso are self inflicted and Prince Ned Nwoko , as we found out has no hand in his arrest neither is Prince Ned the architect of some Idumuje Ugboko young men who have been charged for terrorism and murder. Some of the youths charged for terrorism and murder have made useful confessions to the police admitting their crimes. It is unfortunate that Comrade Deji Adeyanju does not understand court processes.
These people in Kuje prisons were arrested and charged with terrorism and murder offences. Some of them were granted bail on certain conditions. One or two of them who met the conditions were released to return to court for trial. Others have not been able to meet bail conditions. All these have nothing to do with the Police or Prince Ned Nwoko. It is sheer ignorance to think or believe that Prince Ned Nwoko will tell the Police what to do with prisoners who are not in Police custody. They are remanded in Prison on Federal Court orders and only the court can determine their fate. But these are alleged dangerous criminals who terrorised Idumuje-Ugboko citizens and allegedly killed two innocent people in the process. The victims and their families who did not retaliate deserve justice.
• Fred Akpewe is co-ordinator of Delta Fresh Vision.