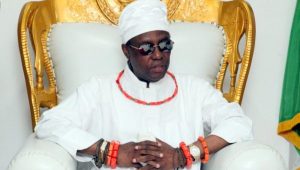 By Joy Odigie
The Oba of Benin, Oba Ewuare the 11 has called on political parties participating in the Edo 2020 election to go about their campaigns peacefully.

The Royal Majesty made the call when he received a delegation of the All Progressives Congress (APC) on a courtesy visit at his Palace in Benin on Saturday.

The APC delegation, led by Yobe Governor, Mai Mala Buni, was in Benin for the official flag-off of the party’s campaign for its Edo 2020 Gubernatorial candidate, Pastor Osagie Ize-Iyamu.

The Oba said the Palace had not been happy with the recent happenings in the state.
He called on everyone in the state to pray for a peaceful Edo election.
“There is nothing as powerful as prayers.

“As you go about your campaign, go about it peacefully and without bitterness,” the monarch said.
Oba Ewuare also reiterated that he remained non-partisan and had never supported any political candidate.

He said, “We remain non-partisan because of the laid down rules of our ancestors; we must be fathers to all.

“We see every candidate as our child and we pray for everybody. It is wiser to leave the fate of the election to God.

Speaking on behalf of the delegation, the Yobe Governor and Chairman, APC National Caretaker Committee, said the visit was to present the Edo 2020 APC governorship candidate to the royal majesty for his blessings.

Buni was optimistic that APC would reclaim the state come Sept. 19. (NAN)

Buhari to Nigerians: Come out, vote your conscience

DOPF convention: Concern expressed against politicians’ use of social media as tool for hate...