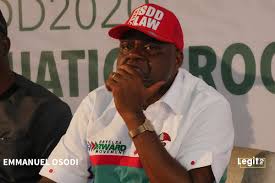 The Advanced National Democratic Party (ANDP) had filed a petition asking the Tribunal to cancel the election on the grounds that the party was unlawfully excluded from the Nov.16, 2019 governorship election in Bayelsa.

Delivering the lead judgment on Monday, Justice Yunusa Musa, held that the ANDP was unlawfully excluded from the election.
Justice Sikiru Owodunni, another member of the three-man panel of justices also agreed with ANDP.

However, the Chairman of the Tribunal, Justice Mohammad Ibrahim – Sirajo in a dissenting judgment held that the petition of ANDP lacked merit and dismissed it.

Justice Sirajo in his minority judgment held that the tribunal lacked the jurisdiction to entertain the petition.

He also maintained that since the ANDP was disqualified before the election on account of fielding an under aged governorship candidate, the case of the petitioner was a pre-election mater and should be handled by a regular court.

Justice Sirajo further held that the ANDP’s candidate could not have been properly nominated for the Nov.16, 2019 governorship election because the electoral body had disqualified the candidate via a letter dated Sept. 21, 2019.
He noted that the party nominated an under aged deputy governorship candidate, who admitted that he was 34-years-old, instead of the 35 years age stipulated by the 1999 Constitution.

Speaking to newsmen, Mr Chris Uche (SAN), counsel to Gov. Duoye Diri said that his client had instructed him to petition the judgment immediately.

In a related development, the Gribunal also dismissed a petition filed by Accord Party challenging the election of the Deputy Governor of Bayelsa, Mr Lawrence Ewhrujakpo on the grounds of false certificate.

Counsel to the deputy governor, Mr Chukwuma Machukwu-Ume told newsmen that he was thankful to the tribunal for clearing his client’s name.
The tribunal had on Aug. 15 entertained three petitions against the Bayelsa governor and dismissed all.

PERSPECTIVE – The road to Caracas and human frailties