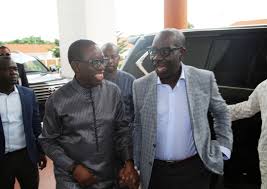 Obaseki, a member of the Peoples Democratic Party (PDP) was announced winner of Saturday governorship election in the state by Independent National Electoral Commission (INEC) after polling 307,955 votes to defeat his main challenger, Mr Osagie Ize-Iyamu of All Progressives Congress (APC), who got 223,619 votes.

In a statement by his Chief Press Secretary, Mr Olisa Ifeajika, in Asaba, on Sunday, Okowa described the re-election of Obaseki as “the confirmation of the will of the people” and called on Nigerians to always stand for good leaders as Edo people just did for Obaseki.

He stated that the people of Edo across the 18 local government areas of the state spoke loudly and clearly in their reaffirmation of the choice of Obaseki as their Governor.

The governor, who is the Chairman of South-South Governors’ Forum, said that with the re-election of Obaseki, the entire region was now being ruled by the PDP.

“Let me congratulate my brother Governor, Mr Godwin Obaseki and his Deputy, Comrade Philip Shaibu, on their victory in the Sept. 19 Governorship election in Edo.

“It is heart-warming to see you re-emerge as Governor of Edo against all odds and I am grateful to the people of Edo for shunning the entreaties of retrogressive forces who were deviously-bent on subverting the wishes of the people.

“Let me also thank the Independent National Electoral Commission (INEC) for being truly independent as required by the laws of our land.

“The most significant aspect of this victory is the peaceful outcome of the election as Edo people proved pundits wrong by ensuring that the elections were devoid of violence,” he said.

Felicitating with the PDP on the victory, Okowa said, “let me also congratulate our great party, the Peoples Democratic Party (PDP) and the Chairman of the PDP National Campaign Council and Governor of Rivers, Mr Nyesom Wike and other members of the campaign Council for their efforts which led to the victory of the party in Edo.

“The brotherhood displayed by the Governors of the PDP and other party members towards the re-election of Obaseki is what the country needs to take the nation to greater heights in 2023.

“Going forward as a nation, we can only develop further if the people are allowed to choose their leaders at all levels without any hindrance.

“It is therefore a clarion call on INEC to continue to do the right thing as an unbiased umpire.’’

“On behalf of the government and people of Delta, I congratulate you my brother Governor, Mr Godwin Obaseki and your deputy, Comrade Philip Shaibu, on your resounding re-election by the resilient people of Edo who displayed honour, dignity and courage.

“It is my prayer that God will grant you wisdom, knowledge and the needed resources to attend to your campaign promises to the people,” he added.