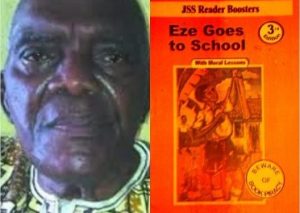 Not many people in contemporary Nigeria may be familiar with Onuora Nzekwu’s award winning classic, Eze Goes To School. Although, the book is still a recommended textbook for use in secondary schools, some of the challenges faced by the main protagonist, Eze Adi, may be waning, particularly in Southern Nigeria where literacy has received a boost more than 60 years after the book was first published.

Notwithstanding, Eze Goes To School, remains a fitting metaphor for a discourse on the state of education in any part of Nigeria. This is chiefly because most of the problems that mitigated against Eze achieving his life long ambition of going to school are still witch us. These include poverty, lack of access roads, inadequate or absence of schools with modern equipment, lack of support particularly by extended family members, widowhood, large families, and other cultural practices inhibiting learning, among others.

However, it must be acknowledged that significant progress made in improving literacy in Nigeria, especially in the South, started with the courageous and foresighted decision of the late sage and former Premier of Western Nigeria, Chief Obafemi Awolowo, who declared free education in 1955.

Awolowo’s free education policy led to mass enrolment in schools, setting up of new ones and improvement of infrastructure in primary and secondary education, thereby paving way for the emergence of a literate workforce, primed to take over from the colonial masters. The policy also opened doors for children from indigent homes to go to school, among other benefits.

Undoubtedly, Chief Awolowo’s foresight helped in challenging succeeding governments, which sprang from the old Western region, which includes, Lagos, Ogun, Oyo, Osun, Ekiti, Ondo, Edo and Delta States. This is especially as some of the governors are direct beneficiaries of the free education policy.

With the creation of Delta from defunct Bendel State in 1991, successive administrations have improved on the educational sector, especially because of the high demand and expectation from the citizenry. This is more so because Delta is not regarded as one of the educationally disadvantaged States.
Incumbent Governor of Delta State, Senator Dr. Ifeanyi Arthur Okowa has not departed from the bid to up the ante in the education sector. In fact he has scored several milestones since assumption of office on May 29, 2015.

On assumption of office, Okowa hit the ground running by focussing on all aspects of the education sector. An unprecedented and bold decision was also taken to appoint three commissioners to superintend over this important sector, namely; Ministry of Basic and Secondary Education, Ministry of Higher Education and Ministry of Technical/Vocational Education. It is a reflection of the premium the Governor places on getting the children off the streets into the classrooms.

In line with his SMART Agenda which has now crystalized into a Stronger Delta initiative, the Okowa adminstration has reportedly established additional 18 public primary and 40 secondary schools across the State, in an effort to boost foundation years of children; most of whom had no access to formal education.

Consequently, access to education in rural and difficult terrains have greatly improved. Primary and secondary schools in urban centres have similarly been decongested in a bid to have a spike in enrolment as stipulated in the Sustainable Development Goals (SDG) of the United Nations.

In all, Delta now boasts of 1,130 public nursery /primary schools, out of the 2,962 in the State and 462 public secondary schools of the total number of 1,406. Enrolment in the public primary and secondary schools, as at the end of the 2017 /18 academic

Relatively, the Delta State Government paid the counterpart fund of the Universal Basic Education (UBE) programme, from 2015-2017, to the tune of N5,188,221,561.85 which enabled it to receive over N10 billion as matching grant for the three-year period.

To restore quality of teaching, the Governor Okowa administration established the Teachers Professional Development Centre (TPDC) for the upgrade, retooling and training of teachers at all levels. Over 6,500 personnel in the education sector, including Federal Government N-Power and volunteer teachers at the community level under the auspices of the TPDC have been trained in the last five years. Another 100 French teachers were similarly trained in the period under review.

The Ministry of Basic and Secondary Education struck a synergy with the State Universal Education Board (SUBEB) and the Delta State Oil Producing Areas Development Commission (DESOPADEC) to provide and upgrade infrastructure in this subsector. At the last count, 3,366 classrooms have been renovated as a result of this partnership. Of the 140,478 students’ furniture provided, 95,496 and 44,982 were by the ministry and SUBEB, while DESOPADEC accounts for the rest. Of the 22,440 teachers’ furniture provided, 15,086 were by the ministry, while 7,354 was by SUBEB.

Additionally, 73 block fences were constructed by the ministry of Basic and Secondary Education in collaboration with with SUBEB. Eight science laboratory blocks were newly constructed and 14 block fences renovated, by the ministry, with SUBEB providing 30 solar powered boreholes in an unprecedented investment at the level of Basic and Secondary Education.

Realising that not all students from secondary school end up in the university and in a bid to tackle the perennial drop out syndrome, Governor Okowa frontally unveiled a technical and vocational policy that has revolutionised the subsector. The promulgation of a law to establish a Technical and Vocational Education Board in June,2015 and the inception of a Ministry of Technical/Vocational Education signposted the bullish resolve to change the narrative.

First was the massive renovation of six existing technical colleges, which were largely dilapidated until then. Then followed the revamping of eight vocational skill centres, ensuring that they were upgraded and fitted with modern workshops to suit the newly designed curriculum of the ministry.

The Ministry of Technical/Vocational Education also launched digital platform to promote interests in Information Communication Technology (ICT) thereby underscoring the benefits of computer education in a global village, while 45 courses had been accredited in all the six technical colleges by the National Board for Technical Education (NBTE) including hundred per cent improvement in enrollment in the vocational and technical colleges.

Pastor Azuka Onyebo, President of PatClem Foundation and native of Kwale, spoke glowingly of Okowa’s interest in promoting Vocational and Technical Education. He confirmed that the Technical College in Kwale, headquarters of Ndokwa West Local Government was indeed wearing a new look.

Said he: “There’s no doubt that Governor Okowa is working. Apart from several other landmark projects in Ndokwa West, the special attention given to the Technical College in Kwale is remarkable. Even though our people wish that the school should be upgraded to a polytechnic, we are satisfied with the renovations by the government so far”.

On his part, Deacon Sunday Elueni, a former Secretary of Isoko North Local Government expressed joy at the work done in Ofagbe Technical College, noting that the Isoko nation would remain eternally grateful for what the Governor has done.

“There is no doubt that Senator Dr Okowa has done very well for Isoko people by giving Ofagbe Technical College a deserved facelift. Before the commencement of this administration, the school had been almost abandoned. It had been overtaken by a thick bush. But the Governor turned the place around and restored the lost glory”, he declared.

Similarly, a wave of infrastructural provision and upgrade in higher education has raised the atmosphere of teaching and learning in the three State polytechnics at Ogwashi-Uku, Oghara and Ozoro, colleges of education, that of physical education and health technology at Agbor and Warri, Mosoghar and Ofuoma respectively and Delta State University Abraka and its campuses at Anwai, Oleh and Oghara.

There has also been an upgrade at Delta State University Teaching Hospital (DELSUTH), Oghara.
As the architect of a new education sector in Delta State, these landmark achievements by Governor Ifeanyi Okowa, which were made possible by his focused energy in rebuilding the education sector aggressively, has further opened a frontier of prosperity for all Deltans.

But, the greatest beneficiaries of the enumerated milestones are the indigent children, who on account of circumstance of their birth, location or economic status of their parents might not have had access to education. In Delta, we can boldly say, at last, Eze Goes To School!

Northern leaders rise against Buhari, advise him not to seek re-election