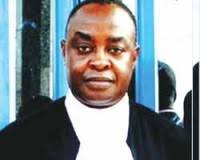 The Senior Political Adviser to the Governor of Delta State Rt. Hon. Funkekeme Solomon has expressed great shock over the transition of Dafe Akpedeye, Barrister at Law and a Senior Advocate of Nigeria (SAN)

Dafe Akpedeye was a former Attorney General and
Commissioner for Justice in Delta State.

In a statement by his Public Relations Officer, Mr. Tebefia Ogbeni, Rt Hon Funkekeme Solomon described the late Dafe Akpedeye as a brilliant legal practitioner, a friend and a former colleague.

“I first met Dafe Akpedeye way back when he represented my Community (Ojobo) in a legal land tussle he inherited from his father (Chief Barr Alex O. Akpedeye) and that has been in the court for over a hundred years. He was our lawyer. As the Community leader, we worked very closely to prosecute the case.

“The late Dafe Akpedeye demonstrated dexterity, diligence and exceptional brilliance in handling the matter and won it at the Supreme Court in favour of my Community.

“It was no surprise therefore when he was elevated to the rank of Senior Advocate of Nigeria (SAN) in 2004 and later conferred with the national honor of Officer of the Federal Republic of Nigeria (OFR) in 2014.

“A graduate from the prestigious Harvard Law School, Dafe Akpedeye was a true ambassador of that great institution and as an advocate and law teacher in Delta State University, he no doubt contributed hugely to the development and practice of law. We have lost one of the most extraordinary and distinguished luminary in the legal profession.

” The news of his demise came to me as a great shock. He was a warm, friendly and affable personality and I feel a personal loss at his transition.

“On behalf of Ojobo Community, my family, friends and staff of the office of the Senior Political Adviser to the Governor of Delta State, I mourn the transition of my Community lawyer, friend and former colleague in Government, Dafe Akpedeye SAN”, he said.

Rt Hon Funkekeme Solomon prayed to God for the repose of the soul of the departed.

Build yourself up to enhance your worth, relevance in society, Solomon tells Hair dressers

PIGB: Atiku urges Buhari to have a rethink