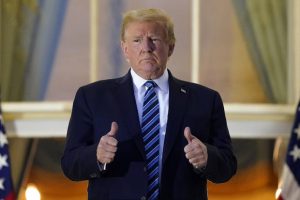 President Donald Trump of the US.

By Idang Alibi
Perhaps, because of its nearness to today’s presidential election in which the USA President Donald Trump is seeking re-election, the Trump corner may not have sufficient time to work on the minds of Americans to ensure that Trump maximizes a rich harvest of votes for the spectacular rescue of an American, Philipe Nathan Walton, the son of a missionary father who was kidnapped in Niger Republic and domiciled in Nigeria for one million dollars demand for ransom. The splendid rescue operation which took place early on Sunday in a village in Nigeria which is yet to be identified, is a stuff of which great thrillers are made. Right from its planning to its perfect execution, It is the sort of stuff which appeals greatly to Americans for it projects their country’s power and enhances the image of the president, commander- in- chief under whose watch the daring act was pulled off so successfully.

For if the rescue mission had been a failure, the Joe Biden corner would have played it up repeatedly as an indication of Trump’s clumsiness and cluelessness. It would have been used as a humiliation of America and Trump’s unsuitability as commander-in-chief.

While Trump and the Americans are jubilating, we Nigerians, especially President Muhammadu Buhari and his government, are left to lick our wounds. This is because with that spectacular success, Nigeria has been raped and there is absolutely nothing we can do about it. It is obvious that no one in Nigeria was informed about the planned operation. In fact, it is possible that no one in our country knew that an American had been kidnapped somewhere else in Niger Republic and was being kept anywhere here.

Because the Fulani Empire is alive and flourishing in West Africa defying and disregarding modern day national boundaries, Fulani herdsmen can do whatever they want and no one in government will know anything about it not to talk of doing anything about it.

From accounts of the kidnap in Niger and the rescue in Nigeria, it is clear that Nigeria has no security of any kind that can assure citizens of safety. The security we know of here is that of state agents terrorizing and brutalizing innocent citizens and denying them of their rights to freedom and dignity at the slightest provocation. We have no air defense, no land defense and I guess, no sea defense also. Criminals can kidnap a White person in Niger and take him through our land borders and none of our men and women in uniform or plain clothes will be able to notice a thing. Their eyes are firmly fixed on extorting innocent citizens.

The Americans are also aware of the fact that none in our leadership can be trusted, and I guess, they did not let those in authority know that an American had been kidnapped and that he was in Nigeria. They just kept quiet because alerting the Nigerian authorities and soliciting their help will do nothing other than help to compromise the rescue effort. Their security men are permanently fixated on lobby as to which ‘lucrative posting’ they can be posted to for huge returns.

The Americans did their planning and breached Nigeria’s sovereignty and there is nothing Nigeria can do about it. In fact, Nigerian authority will be too ashamed to acknowledge anything, to admit anything, to confirm anything or deny anything. This is a matter that a statement from the presidency should have been issued on it that fateful Sunday morning but up till now, mum has been the word for what can anyone say about such a disgraceful thing? It is like being raped and you are saying something about it, thereby stigmatizing yourself in the process. Which sane or self-respecting person does such a thing except some feminist advocates who are not victims themselves?

And this is why Nigerians are supporting the #EndSARS protest for a better governed Nigeria. Our country has gone to the dogs. Nigeria that ought to be the America of Africa pulling such spectacular feat that America has just pulled on our land thereby trampling on our sovereignty and dignity, is today the playground of terrorists, kidnappers, drug barons and couriers and all sorts of rogues. If our security agencies had by a wee chance gotten wind of the America operation and had sought to confront the rescuers for violating our sovereign space, they would have fought a war brought about by herdsmen from God knows where.

We have simply refused to have bonafide citizens with defined borders because it suits our ruling class to have fluid citizenry and fluid borders where herdsmen can roam from Mali, Niger, Chad and Cameroun to the Atlantic in Badagry. They can vote in our elections and have rights to kill indigenous peoples in Nigeria and take over their land and nothing happens. For how long will we continue to endure this type of life? We have become a joke of a country. No one respects us and our leaders cannot even enjoy the courtesy of being informed that another country is coming to rescue his citizen who is held against his will in a corner of our own country.

Trump’s triumph with the rescue of citizen Walton on our soil without our knowledge or input is a loud statement on our nothingness. It says that we are not worth any consideration whatsoever. We do not have what it takes to defend ourselves and no one needs our permission to do what he or she wants to do on any piece of our land. This knowledge of our helplessness and worthlessness makes me feel so sad. As my Bekwarra people will put it, I feel raped, with scrotum included! This country was not willed by God to be like this. We were meant to be a force to reckon with not just in Africa but in the entire world.
If this rape of Nigeria, which proves Trump’s manliness, has a significant impact on today’s election, it will serve to confirm the opinion of some of us Trump’s supporters that the divine hand of God is truly working in his favour. God can use anything—situation, people, just anything, to achieve his purpose. Trump, who once described Buhari as a ‘’lifeless fellow’’, may enjoy from the failings of a ‘lifeless country’ which does not take the business of life and living very seriously. How sad. 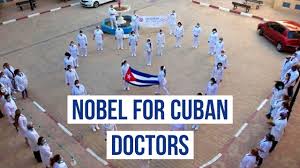 Nobel Peace Prize: A case for the White Coat Army

Okowa hints of better days ahead for Deltans