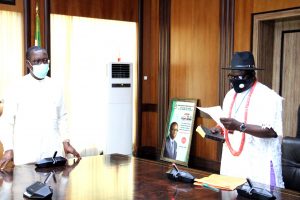 Okowa gave the charge at his office in Asaba, while swearing-in a new member of the Commission, Mr. Bright Abeke to replace late Joyce Overah who passed on this year.

The governor, who said that he was impressed with the interventionist efforts of DESOPADEC in oil bearing communities in the state, said the best way to address the basic needs of the people was to carry them along in the conceptualization of projects.

He, therefore, urged the Managing Director of DESOPADEC and its (DESOPADEC’s) Commissioners to continue to stay in touch with the people to ensure that developments undertaken by the Commission actually come forth from the grassroots.

According to him, despite economic downturn, infrastructural transformation of the creeks and riverine communities would continue to receive priority attention from his administration because of their enormous contributions to the economy of the state and the nation at large.

While advocating that the best way to deepen peace and unity in oil bearing communities was to attract landmark projects to the areas, the governor advised the people to remain calm to enable them harvest more dividends of democracy.

He congratulated Mr. Abeke on his appointment, screening and successful swearing-in, even as he urged him to work with the leadership of the Commission in attracting development to Sapele and other oil bearing communities in the state.

“As you join the rest of the membership of DESOPADEC, it is my hope that you learn as quickly as you can and that you work in partnership with other Board members to find ways of bringing development and also empowering our people in the oil producing areas.

“As a state, we are doing the best that we can under this very difficult circumstances and I am proud to say that I have formally visited to inaugurate some very remarkable projects done by DESOPADEC in the past few years.

“It is my hope that despite the present challenges, that the Commission will continue to meet the needs of our people, because if we actually seek for peace, if we seek for the partnership of the people, we must really touch their lives, we must at every point in time be there and available for them to talk to,” he said.

The governor reiterated that there would be no abandonment of projects by his administration, pointing out that despite the present economic realities in the country, all projects would be completed in line with available resources.

“I want to reassure our people that we are truly very committed to ensuring that all projects that have been set out in our budgets, both in the state and also the budget of DESOPADEC that God would provide resources for us to undertake them.

“All over the state, particularly in our riverine communities, we will not abandon any project that was started by the special grace of God. So, we continue to pray and I urge all Deltans to continue to pray for us that the resources will improve because the COVID-19 pandemic has impacted very negatively on our resources.

He equally thanked Deltans for their sustained support for his administration, promising to remain focused in building a ‘Stronger Delta’ for the collective interest of all Deltans.

“I must thank our people from the oil producing areas for the level of support that they have given to us as an administration. Since I came in 2015, aside from the initial challenges of 2016 which cost us a lot as a state, they have stayed steadily partnering with us ensuring the peace of our various communities.

“And I must thank all the stakeholders who have been involved in this (partnership) and I pray that we will continue in this partnership because in this partnership, as long as there is peace, we can manage the limited resources in such a manner that it truly impacts positively on the lives of the people,” he stated.

In his post inauguration speech, the new DESOPADEC Commissioner, Mr. Bright Abeke thanked the governor and other stakeholders for finding him worthy to serve and promised to synergize with others in fashioning out ways of impacting positively on the socio-economic lives of people in the creeks and riverine communities.

He gave assurance that the collective interest of the people would override his personal interest in the discharge of his official responsibilities.

Mr. Abeke who hails from Sapele, was until his appointment, Special Assistant to the governor on Youth Development.

Press Statement: PDP To Buhari: Stop whining, accept the will of the people