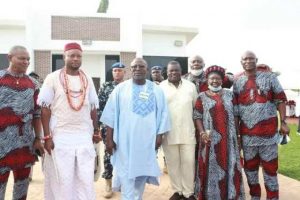 In an emotion laden voice, the member representing Aniocha North Constituency in Delta State House of Assembly, Hon. Engr. Emeka Nwaobi has revealed that his father before his death always wished he would die in Nigeria when the ultimate call of death would comes.

According to him, God granted his request, he came back to Nigeria from the United States of America last December before death came calling on the 26th of August, 2020.

“My father also had wished he would be buried as soon as he stopped breathing. He was never keen about being taken to the hospital or run up and down seeking medical solutions if he was sick.

“My father did his best beyond all reasonable doubts and died a gentleman. And that is why we granted his wish of burying him immediately he passed on and decided to do the funeral service now”, Hon. Nwaobi explained.

The lawmaker gave this background while giving a vote of thanks as the first son during the funeral mass at the St. Paul’s Catholic Cathedral, Issele-Uku in Aniocha North LGA of Delta State on 18th December, 2020.

Nwaobi had therefore, asked God to grant him the grace to fill the vacuum the love his father had for his mother would create in her.

He affirmed that the closest couple he had ever seen in his entire life was his parents who were often seen together walking around the Legislators’ Quarters in Asaba before the death of his father.

He however, appreciated the dignitaries for honouring him and his family with their presence, while praying to God to grant them longevity of life beyond the 87 years lived by his father.

The sermon as preached by the Bishop of Issele-Uku Diocese, Most Rev. Michael Odogwu Elue harped on the quality of life lived by Sir Marcel Mekowuhe Nwaobi, which he said is indicative of the life the children are living, especially Hon. Emeka Nwaobi.

In her tribute, the First daughter, Mrs Uche Caroline Abojei, described her father as a God fearing Man “who Molded My siblings and I in that Light,” assuring that they would continue to make their Father proud by way of upholding his good legacies.

Also in her tribute, the second daughter, Lady Josephine Umemezie who is based in America, said that the days after the passing of the father were the most difficult, “because such a wise, loving and caring Man would no longer be with us.”

Lady Umemezie described the father as a highly disciplined and faithful Catholic who instilled in them, the entire children, the virtue of peace, humility, faithfulness, discipline and the fear of God. “You gave us plenty of advice even in your old age which we will forever be grateful for,” she stated and promised also that their father’s legacies would never be forgotten.

The burial ceremony was graced by the Governor of Delta State, Senator Ifeanyi Okowa, his Deputy, Deacon Kingsley Burutu Otuaro and the Minority Leader of the House of Representatives, Hon. Ndudi Elumelu.

The reception at the Hon. Nwaobi’s palatial residence was lavished with Chioma Jesus, the Ekwe Sample, Kandy Sea, Lady Ouch, Iyke Shalom and other popular musicians entertaining the audience.

It’s a lie, Oyedepo was not denied visa, says US Embassy