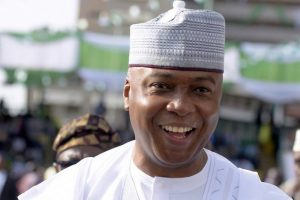 In a statement by his Chief Press Secretary, Mr Olisa Ifeajika, in Asaba, Okowa acknowledged Saraki’s unparalleled efforts at repositioning and ensuring the independence of the legislature when he served as Chairman of the 8th National Assembly.

He stated that Saraki contributed immensely to the political development of Nigeria as a former governor and President of the Senate.

According to Okowa, Saraki’s Senate was more of the people’s parliament where several life-changing bills and motions were passed to improve on the welfare of Nigerians.

He also lauded Saraki’s role as Director-General of PDP Presidential Campaign Council for the 2019 general elections, which he said, was very remarkable notwithstanding that the party did not win the presidential election.

“As President of the Senate from 2015-2019, you led a remarkable pro-people Red Chamber which was dedicated to the course of providing Nigerians with legislations that will make their lives better.

“It is also worthy of note that the Senate you led clamoured, supported and obeyed the rule of law in all its endeavours.

“Under your watch, the independence of the legislature was a core component of your leadership as summons from the Senate and House of Representatives were well respected by the executive.

“In spite of several distractions, you achieved significant milestones in the execution of your Legislative Agenda which was aimed at improving governance, ease of doing business and the quality of life of Nigerians.

“On behalf of my family, the Government and people of Delta, I join your family, political associates, friends and well-wishers to thank Almighty God for your life which has been marked with outstanding accomplishments.

“As you clock 58 years today, it is my prayer that God will continue to bless you with good health and wisdom to continue serving mankind,” Okowa stated.

Delta Police Command assures of adequate security during, after the polls

Nigeria’s ‘genocide’: Who is helping the thousands of displaced Christians?