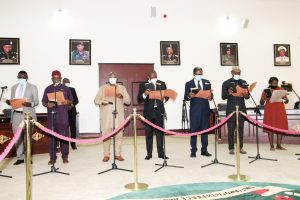 Chairman, Judicial Panel of Inquiry into the Boundary Dispute between Ozoro and Oleh Communities, Hon. Justice Marcel Okoh (middle) and other members of the panel subscribing to the Oath of Office during their inauguration in Government House, Asaba. Wednesday 23/12/20. PHOTO: JIBUNOR SAMUEL.

A seven-man Judicial Panel of Inquiry into the land dispute between Oleh and Ozoro communities in the state has been unveiled by Governor Ifeanyi Okowa of Delta State.

At the inauguration ceremony at the Government House, Asaba Okowa said the panel would determine the remote and immediate causes of the conflict between the parties in Oleh and Ozoro communities.

The governor said it was disheartening that after all we have been through as a country and a State throughout this year, our State is now confronted with what is obviously an avoidable conflict arising from land dispute.

He said the dispute between Oleh and Ozoro had lingered on for decades, adding that he was aware of the efforts made by Isoko Development Union (IDU) in resolving the dispute to no avail.

He stated that following claims and counter claims from all the parties involved, there was a clear and present danger that the situation might spiral out of control and lead to breakdown of law and order in Ozoro and Oleh, with the possibility of other communities being caught in the crossfire. As an administration, we cannot allow that to happen.

He added that setting up the enquiry was to prevent the situation from escalating into full-blown communal conflict.

Okowa pointed out that peace building remained one of the cardinal programmes of his administration because it is an incontrovertible fact that real development cannot take place in the absence of peace.

“On Monday October 12, 2020, residents of the State woke up to the horrific news that as much as 11 persons were killed at a farm in Oleh while one person is missing. The news was as numbing as it was inexplicable.

“The government quickly waded in to douse the tension and prevent the situation from degenerating into a full-blown inter communal crisis. Through the local government administration, relevant security agencies, and the traditional institutions, working with the Special Adviser on Peace Building and Conflict Resolution, we have been striving to ensure that there are no reprisal attacks while appealing to those who lost their loved ones to the gruesome act to restrain themselves and keep the peace.

“I am aware that this dispute between Ozoro and Oleh has lingered for decades. I am also aware that the Isoko Development Union has been mediating in the matter. As an administration that believes in the bottom-up approach, we gave our full backing to all the efforts of the IDU to resolve the matter amicably, but to no avail.

“Regrettably, the faceoff took a frightening dimension with the October 12 tragedy, ostensibly over the disputed land. While we commiserate with the bereaved, it is incumbent on us all that we do not play politics with the lives of the dead. Justice must be done and seen to be done in this matter as their cold-blooded murder is purely a criminal act, separate from the boundary dispute.

“Insecurity and violence are not only needless distractions; they also drain the public purse. Whenever there is a breakdown of law and order, funds that could have been deployed to building infrastructure and similar development projects have to be channeled towards procuring peace, even as ongoing projects within the affected communities are stalled.

“In view of the foregoing, the administration considers it exigent to set up a Judicial Commission of Inquiry to properly investigate/examine the boundary dispute between Ozoro and Oleh, and proffer solutions that would meet the expectations of all the parties involved,” he said.

The panel which has Justice Marcel Okoh as chairman, has the following terms of reference:”to identify the parties and/or interest groups in the conflict and the extent of the claim of each party or group to the land in dispute; determine the remote and immediate cause(s) of the conflict between the parties in Ozoro and Oleh Communities.

“to consider any previous effort(s) at settling the dispute between the Ozoro and Oleh Communities and establish the reason(s) for the failure of such efforts.

Okowa announced that the panel had eight weeks to submit its report and urged it to be mindful that further delay may cause further crisis.

He appealed to all Deltans to remain law abiding, embrace dialogue and peaceful coexistence, and shun all acts inimical to the prosperity, peace, and progress of the State.

Responding on behalf of members, the Chairman, Justice Okoh, thanked the governor for the confidence reposed in them by entrusting them with the assignment. “In discharging our duties, we will do so diligently and with the utmost sense of responsibility and fairness, and without any fear or favour,” he said.

REJOINDER RE: SHOCKING TRUTH ABOUT THE PROBLEMS OF IDUMUJE UGBOKO AGAINST CHINEDU ODAI (NED NWOKO)