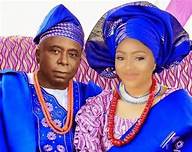 By Fred Akpewe and Timothy Nwamu
While DELTA FRESH VISION believes it is not out of place for the media to write about the private lives of celebrities, especially when such write-ups are of public interest, but this public interest must be properly defined in a way that does not offend against the ethical demands of journalism which makes it imperative for journalists to respect the right to privacy of celebrities.
It is against this background that we particularly feel disturbed about the endless speculations by media practitioners about a non-existent affair between Prince Ned Nwoko and Chika Ike, including a mischievously concocted relationship with one Sarah from London and Philis from Zambia. It becomes nauseating and indeed, more worrisome when the rumours are carried to the point of alluding to a secret marriage between Prince Ned and Chika Ike

Delta Fresh Vision believes that though Prince Ned Nwoko and Princess Regina have lost their privacy due to their celebrity status it is their right to be left alone to enjoy their marriage rather than be distracted in a manner that is not only harmful, but also insensitive to the emotional sensibilities of both Prince Ned and Princess Regina. Prince Ned Nwoko is currently engaged in malaria eradication project in Africa and needs all the concentration to achieve this onerous global duty.

Besides, he has consistently maintained that though as a Muslim he is entitled to marry as many wives as he wanted he certainly has no marital relationship with Chika Ike. Good judgment demands that such a definitive rebuttal ought to settle it, as any attempt to further deliberate on the issue is on the threshold of falsehood and imagination. Journalism practitioners on the social media have a responsibility to obey the ethical rules of journalism to be truthful in dishing out information and not to misinform. Indeed, the use of the social media should not be to sensationalize, irrespective of it’s near lack of censorship. Those with compelling need to glamorize Prince Ned and Princess Regina on the social media should do so responsibly in a positive rather than the negative. We know that Prince Ned and Princess Regina’s media glitz is largely a creation of the media but if the builder of the ship tries to destroy it’s own creation then something is wrong. We think that the media should try to protect some of society’s bests who have tried to put a smile on people. The Nigerian paparazzi should not try to imitate the foreign paparazzi that drove Princess Diana to her death or caused disaffection between Kanye West and Kim Kardashian.
Prince Ned Nwoko through personal effort and through his FOUNDATION has tried to improve the lot of humanity. He deserves commendation and not distraction laced with mischief. And as the world celebrates Prince
Ned on his 60th birthday, the best gift we should give him is rest of mind, peaceful home and not worries.
• Fred Akpewe and Timothy Nwamu are of DELTA FRESH VISION

Establishment of schools, a strategy of govt to boost access to learning, says Ukah