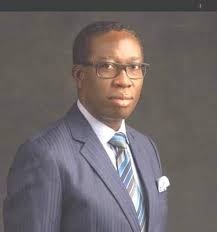 The National President of the Pentecostal Fellowship of Nigeria (PFN), Dr Felix Omobude says the body plans to honour the Governor of Delta State, Senator Ifeanyi Okowa, with the “Kingdom Defenders Award,”

The PFN president said the reason for the award was for assisting PFN Delta State to expand the Kingdom of God and in leading the good people of Delta State.

Dr Omobude stated this recently during the PFN Delta State annual thanksgiving and the foundation laying ceremony of the Alpha and Omega State Secretariat at former Nkoyo Ibori Children Referral Home, Agbarho, with a theme, ‘Magnify the Lord with Thanksgiving’.

While commending the governor for his role in expanding the kingdom of God in the state, he said that the ‘Kingdom Defenders Award’ was for Christians who, in business, governance, or profession, still remember their faith and did something exceptionally outstanding for the kingdom of God.

“Let me specially thank Governor Okowa for this gesture. We, the PFN at the National level have recognized this effort. We have set at the national office, a platform, an honour role for those in business, or governance and profession, who still remember their faith.

“Those who did something exceptionally outstanding for the kingdom, what we called the ‘Kingdom Defenders Award’, is given to such persons in Nigeria.

“I also convey it to His Excellency that we appreciate his efforts in leading the good people of Delta State and the role he has continued to play in expanding the kingdom of God. So, this award will be officially presented to his Excellency at a later date,” he said.

The PFN president who was the guest speaker on the occasion, in a message title: ‘How Can I Forget?’, and reading from 2nd Samuel 6:16-23, admonished Christians to always remember their past, where they were coming from and use same to appreciate their present position in life.

Dr Omobude said, “if you don’t know your past, you will not be able to appreciate your present position and your may not be able to focus for a better future.”

He said, based on all that happened in recent times all over the world, where it was erroneously predicted that the corona virus would kill Africans like chickens, all Deltans should be grateful to God for keeping them alive.

Omobude described King David in the Bible as a man who always acknowledged the goodness of God in his life, who lifted him from a nobody to the position of a king, which prompted him to dance graciously in the sight of the people of Israel.

He said on the contrary, King David’s wife, Micah attracted the punishment of God to herself when she displayed attitude of complete disregard and forgetfulness of the goodness of God by despicably speaking against her husband.

He commended the Delta State Chairman of PFN, Bishop Kingsley Enakirerhi for his commitment and selfless service to advance the kingdom of God in Delta State.

The Governor who was represented by the Deputy Speaker of the State House of Assembly, Rt. Hon. Christopher Ochor, assured PFN of the governor’s support at all times to move the body of Christ forward.

Earlier in his address, the State Chairman of PFN, Bishop Kingsley Enakirerhi expressed joy that one of the visions and dreams for which God made him the chairman of PFN was being fulfilled.

Bishop Kingsley Enakirerhi employed everyone present to join hand with the PFN Delta State to build the state Secretariat, which he described as a city of refuge where all may come and find rest.

The ceremony witnessed presence of dignitaries in the body of Christ which included the Immediate past National President of PFN, His Eminence, Papa Ayo Oritsejafor; PFN National Vice President, South-South, Bishop Simeon Okah; His Grace, Archbishop Goddowell Awomakpa; the Rivers State PFN Chairman, Apostle Zilly Aggrey, and a host of others.