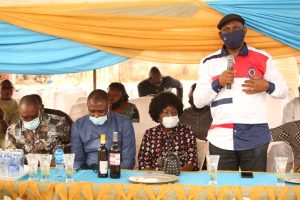 Mr Olisa Ifeajika, Chief Press Secretary to Governor Ifeanyi Okowa,
has called on youths’ groups in the state to be focused and relevant partners with government in the provision of good governance for the people.

Ifeajika made the call when he hosted Illah Youths Association (IYA) members on Saturday in Illah, Oshimili North Local Government Area of the state. 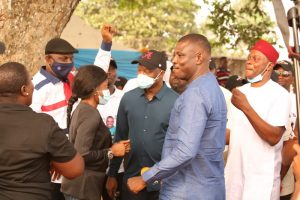 He said that the meeting with the youths had become necessary as it would ensure that they and political leaders were in synergy at all times for the development of the community and the state.

The Governor’s spokesman also urged the youths to support the leaders and women in the community and Oshimili North ahead of March 6, 2021 council polls.

Ifeajika was supported at the occasion by top government functionaries from the local government area and beyond, including the Chief Whip of Delta House of Assembly, Princess Pat Ajudua; Commissioner for Youth Development, Comrade Ifeanyi Egwunyenga and Commissioner for Information, Mr Charles Aniagwu.

Ifeajika said, “I am happy to say that our youths in Illah are not wasting as postulated sometime ago by a renowned academic, because I know they are very productive and I am sure that it is the same in Oshimili North and Delta North in general.

“The whole essence of today’s event is for us to gather and partner in the development of our community, going forward.

“I, therefore, appeal to you all to continue to support leaders in the community and the local government area in the interest of development.”

Addressing the people, Princess Pat Ajudua, called for more support for the governor and candidates of PDP in the MARCH 6 local government election and 2023.

“I thank God today for this wonderful gathering and I must let you know that as leaders of Oshimili North we are ready to put an end to APC in Illah.

“As we navigate towards 2023, we must move with one voice and we must be patient in supporting any governorship aspirant,” she said.

On his part, Commissioner for Youths Development, Comrade Ifeanyi Egwunyenga, said that a paradigm shift had been recorded in Oshimili North.

“We prayed for good but God has given us something better. I can assure you that the next three years in Oshimili North will be great.

“I will join in your campaign because the man members of our party have chosen as their candidate is a good man.”

“I am proud of the IYA National President and I can assure you that with a youths-focused Governor in Senator Ifeanyi Okowa, Oshimili North will witness the best in the years to come,” Egwunyenga said.

Also speaking, Commissioner for Information, Mr Charles Aniagwu, expressed delight with the youths of Illah, and said “I am happy that all of you have endorsed our candidate, Innocent Esewezie.

“I am supporting him because I know that he knows what it takes to occupy that position. Innocent Esewezie represents the umbrella in this local government.

“Majority of the youths of this local government have made their marks and have also been recognised.

“The coming election is very important because beyond March 6, we will be looking ahead to 2023 for an Anioma-friendly governor.”

He commended Governor Okowa for instituting ward-based leadership in the state and pledged to partner youths in the local government to develop the area.

“I know a lot of you are not party faithful ,but if you have a governor that is doing well, you support him.

Let me assure you that when we come into office by the grace of God, we will partner the youths to develop our council area,” Esewezie stated.

In his remarks, Chairman of PDP in Oshimili North, Chief Nduka Ogwuda, commended Illah Youths Association for its support and cooperation, adding that the youths could take over the leadership of the country if they remained patient and steadfast.

He urged them and the people of the community to support PDP candidates in the March 6 elections.

“Please come home and support the community and political leadership to develop Illah community because without the youths no community can move forward,” he said.

Responding, the President-General of Illah Youths Association (IYA), Comrade Anthony Onelum, affirmed that Illah would vote PDP in all elections “because we are proud of the leadership in our community.