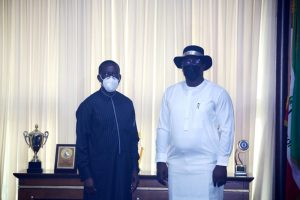 Delta Governor, Dr Ifeanyi Okowa, has charged authorities of Delta State Local Content Agency to enthrone transparency and strict adherence to enabling law in its operations to enable it to attain its mandate.

The governor gave the charge today, Thursday, January 21, 2021 in Asaba while inaugurating the Director-General of the agency, Mr Morris Idiovwa.

He disclosed that the agency was the creation of the Delta State Local Content Agency Law promulgated on Sept. 16, 2020, and stated that the inauguration of the director-general signaled the formal take-off of the agency.

He urged the director-general to be transparent, selfless, disciplined, fair and firm and focus on the goals of the agency.

Okowa explained that local content was the value that companies or industries brought to national and sub-national economies.

According to him, such value is assessed in terms of employment of the locals, sourcing raw materials from the environment in which the companies operate and patronising local contractors as a matter of obligation.

“This is especially so when it involves extractive industries. Aside from employment generation, available evidence indicates that local content development engenders industrialization, facilitates economic inclusion and enhances the ease of doing business.

“By virtue of its coastal nature, Delta State is host to a number of extractive industries and as the industrialisation drive of this administration gathers momentum, a local content policy becomes imperative.

“This is to ensure that companies generate substantial local content, while ensuring compliance with standards and targets contained in extant rules and regulations as well as individual contracts,” he said.

The governor said that the agency would among other things, put in place a framework to enhance the ability of local indigenous companies to exploit local opportunities while staying competitive.

He said that it was also to monitor and ensure compliance with the provisions of the law; organize, coordinate and provide capacity-building and specialized programmes and initiate projects, including training for entrepreneurship development.

Other roles of the agency, according to Okowa, are to streamline, coordinate and embark on programmes to increase indigenous local content in the operation of companies in the state; facilitate the provision of local content jobs and project partnership with local, national and international organizations.

He charged Idiovwa to ensure that the agency developed and maintained a database of all companies operating in the state in line with the law which stipulates that they shall maintain 70 per cent local content participation of the state indigenes in their respective operations.

The governor expressed confidence in the director-general’s capacity to execute the goals of the agency, adding that the law was a clear indication of his administration’s commitment towards jobs and wealth creation.

“It further requires companies operating in the state to have an effective development plan to develop local skills, build contracting capacity, employment, technology transfer and use of local manpower in their operations in the state.

“This law is a watershed moment in the socio-economic development of our state. It typifies the commitment of this administration to create jobs, build the capacity of our people, protect our local businesses, and leave the legacy of a strong, resilient, and inclusive economy.

“I have supreme confidence in the ability of Mr Morris Idiovwa to get this agency off the ground, and up and running. An experienced engineer, his career in the oil industry as well as his position on the Communities Development Board of OML 30 puts him in good stead to head such a critical and vital agency,” he added.

In his acceptance speech, Idiovwa pledged to ensure that the vision of the programme was achieved through the input of stakeholders.

He thanked Okowa for finding him worthy to serve, emphasising that with the inauguration, the state would enjoy inclusiveness as far as the local content law was concerned.

Diezani on cabal-sponsored attacks on her: Says EFFCC’s trial by media, disingenuous; to give...