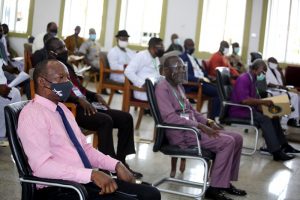 Delta’s Commissioner for Information, Mr. Charles Aniagwu (Right), representing Governor Ifeanyi Okowa, and the S A on Religious Matters to the Governor, Senior Apostle Sylvanus Okorete (left) at a Security Seminar, organized by the Office of the Special Adviser to the Governor on Religious Matters in Asaba. Monday 18/1/21. PHOTO: BRIPIN ENARUSAI.

Delta Governor, Dr Ifeanyi Okowa, on Monday, decried the rising cases of kidnapping, killings and attacks on clergy men and worship centres in the country.

Governor Okowa made the remark at a security seminar tagged “Securing worship centres and clergymen in contemporary Nigeria”, organised by the Special Adviser to the Governor on Religious Matters, at the Grace Cathedral Church of God Mission, Asaba.

Represented by the State Commissioner for Information, Mr Charles Aniagwu, Okowa stated that while security agents were working hard to apprehend the perpetrators of heinous crimes, it had become imperative to equip church leaders and families with basic knowledge on personal security and safety at places of worship.

According to him, in recent times, the nation has witnessed rising cases of pastors abducted and sometimes killed, or in some cases ransomed.

“Although no fatality has been recorded among abducted clergymen in Delta, yet this unholy trend calls for concern.

“Given the turbulence and uncertainties that have plagued this nation in our recent political history, there is no gainsaying the fact that it is the prayer of the righteous that have kept this country together,” he stated.

He said his administration was committed to the security of the State and the peaceful coexistence of the various ethnic nationalities.

“We have continued to bolster our security architecture to ensure that together with your prayers we win the battle against armed robbery, kidnapping, and all forms of criminality.

“As you may be aware, we recently inaugurated ‘Operation Delta Hawk’, a joint task force with the mandate to take the fight to these criminals, be they bandits, kidnappers or gun-totting cattle herders.” Okowa stated.

He commended the efforts of the Commissioner of Police and other security agencies for the great work they are doing to maintain law and order and called for prayers for the success of the gallant law enforcement personnel in the state and country.

In his welcome address, Special Adviser to the Governor on Religious Matters, Apostle Sylvanus Okorote, said it was imperative that Christians should continue to pray for the peace, security and progress of the nation.

“It is not news any more that there’s terrorism and wholesome kidnapping in the country and it has even extended to our state, though not so severe.

“If you watch, all of us have heard severally, pastors being kidnapped and killed, before they start burning churches in Delta, we want to make sure that the clergy knows a little bit of what to do to prevent that.

“The Bible says watch and pray, it didn’t say pray only, that’s the essence of it. We are being proactive. We want to make sure that we are equipped spiritually and otherwise so we can prevent it from happening,”

He said the church in the state was committed to the fight against COVID-19 by ensuring that all necessary preventive protocols were obeyed.

Keynote Speaker and Chairman of the Christian Association of Nigeria (CAN), Kaduna State Chapter, Revd. Joseph Hayab, said it was important to establish that we have a security challenge and as a nation genuinely find ways to tackle it.

He said that from scriptures and experience, there are ways to ensure that churches and pastors are secured and called on the church in Nigeria to wake up and stop the killings and kidnappings.

“I have been talking about kidnapping, payment of ransom and sometimes killing of pastors in parts of the country especially Kaduna State.

“The situation may not be same here but how can we stop the killings and kidnappings to ensure that our worship centres are secured,” he asked.

Alex Obigho to die by hanging for murder, court rules