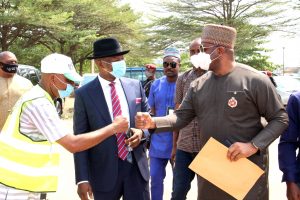 Delta Governor, Sen. (Dr) Ifeanyi Okowa on Tuesday commended the Federal Government on the commencement of the Expanded Special Public Works Programme in the country.

Okowa gave the commendation at the official flag-off of the Special Public Works Programme (the 774,000 jobs) for the South-South Geopolitical zone held at the Federal Secretariat Complex, Asaba.

Represented by the State Commissioner for Information, Mr Charles Aniagwu, Governor Okowa expressed excitement on the commencement of the Programme, adding that the programme will help curb unemployment in the country.

He advised the beneficiaries to see the opportunity as their little beginning while looking to the unveiling of similar projects to engage more Nigerians out of poverty.

He enjoined the 25,000 beneficiaries in Delta to see this as an opportunity to grow the economy of the state and nation.

“Here in Delta we have also engaged several youths into our various jobs creation platforms. We have scaled this up by engaging over five ministries in this regard.

“We look forward to much more collaborative efforts between the Federal Government and the State Government.

“Let me appreciate President Muhammadu Buhari for not making this project and program a political one because hunger and poverty do not know political party.

“When you check the economic effects of this programme, you will appreciate the fact that in Delta alone, 25, 000 indigenes are benefiting from the programme.

“When you also look at the multiplier effect of N20,000 per 1,000 beneficiaries across the 774 local government areas bringing the number to the 774,000 persons you’re talking about N15 billion naira being put into the Nigerian economy currently in the hands of the poorest of the poor,” Governor Okowa stated.

Keyamo who was represented by the Executive Director, Cabotage Services, Nigerian Maritime Administration and Safety Agency, NIMASA, Rt. Hon. Victor Ochei, said the programme was aimed at shielding the most vulnerable from the ravaging effects of COVID-19 pandemic which includes pervasive hunger, poverty, environmental degradation and joblessness.

“Although the Expanded Special Public Works (ESPW) is an ephemeral strategy to last for three months, 5th January-4th April 2021.

“I am convinced that it will provide the necessary economic palliatives to these 774,000 unemployed youths.

“Let me emphasise that the youth who diligently participate in this project implementation may then deploy the knowledge and skills acquired to become self-employed while government and the organised private sector may in due course create or provide exit options,” he stated.

Earlier in his welcome address, Acting Director General, National Directorate of Employment (NDE) Mallam Abubakar Fikpo , said the programme was a significant step in Nigeria’s quest to win the war against mass unemployment as well as to ameliorate the effect of COVID-19 pandemic.

Represented by the Delta State Coordinator of the NDE, Mr Anthony Olu said the Extended Special Public Works (SPW) programme was designed as a veritable tool through which the lives of 774,000 unemployed Nigerians will be positively touched in the next three months.

He said beyond the monetary compensation to the beneficiaries, the communities will receive a facelift through the activities of the participants as they will engage in various community and environment specific works activities ranging from, drainage clearing and maintenance, vegetation control, feeder roads maintenance, irrigation, great green wall and orchard maintenance among others.

In his goodwill message, Chairman Delta State Selection Committee, Professor Kelly Ejumudo, congratulated the participants for being selected and urged them to save from the little earnings to make life better for themselves.

He said the programme was geared towards benefiting the public adding that no government can totally eliminate poverty but every government must take concrete actions to reduce cycle of poverty.

Buhari to pass through London after U.N. General Assembly trip

PERSPECTIVE – Attahiru: The lessons we must learn!