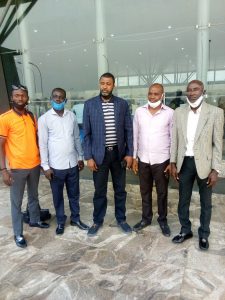 Non-implementation of financial autonomy for the state Houses of assembly has pitched the workers against the Governors’ Forum, who are accused of being the stumbling block to strengthening the legislative houses and ensuring their independence.

President of the Parliamentary Staff Association of Nigeria of Nigeria (PASAN), the umbrella union of house of assembly staff in the country, Comrade Mohammad Usman made this known to journalists whom he fielded questions from at the Asaba International Airport, Asaba on Friday, February 5, 2021.

Speaking on what PASAN found objectionable with the action of governors against the implementation of the financial autonomy, which President Muhammadu Buhari through Order 10 approved for implementation, Comrade Usman said: “What we find objectionable with the action of governors is that the state governors want to make us their stooges. That is it. I don’t understand why the same Constitution you swore to uphold is the same Constitution that you are objecting to now.

“Let’s note that most of these governors came from the legislative houses, and most of them are still nursing the ambition of going back to the legislature at the end of their tenure as governors. Is it because you are now with the executive that you are doing this?

“What really informed this ultimatum is that we have been waiting patiently for the implementation of the financial autonomy at the state levels and nothing has been forthcoming. And the Speakers of the state Houses of Assembly are not doing anything about it. All of them gave a nonchalant attitude to it.
We believe that not only will the implementation of financial autonomy give the legislature independence and strengthen it. On our own we decided to give a 21-day ultimatum for its implementation and if not implemented with the time given we will shut down the whole state Houses of assembly and other affiliated bodies.

“The fight has started, we are not backing down. Financial autonomy was given to us and it must be implemented,” Comrade Mohammad Usman declared.

PERSPECTIVE – Where is Akinwunmi Ambode?