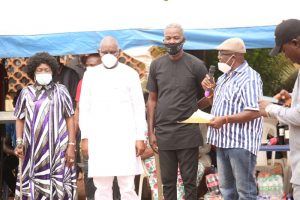 Ahead of the March 6 local government elections in Delta, Oshimili North Local Government Area chapter of Peoples Democratic Party (PDP) has inaugurated a campaign council with a mandate to deliver all candidates of the party in the elections.

Inaugurating the council at the party’s secretariat in Akwukwu-Igbo, on Monday, Chairman of PDP in the area, Chief Nduka Ogwuda, urged all members to support the team to achieve result for the party.

He charged the Council to work hard to deliver all candidates of the party at the polls.

Ogwuda said: “With the powers vested on me as Chairman of the party, I inaugurate this campaign council and call on the members to ensure that all our candidates are successful at the polls.

“The Chairman, the Director-General and Secretary of the campaign council were carefully selected because of their integrity and capacity.

“We have confidence in them, and I urge all members of the party in this LGA to support them as they lead us to victory in the elections.”

Responding, Mrs Ajudua thanked God for the opportunity to serve, and assured that the council would do everything possible to deliver all the party’s candidates.

“We thank God, we thank our party chairman, the party exco and all members in Oshimili North for the confidence reposed in us.

“Let me assure you that by the grace of God, we will do everything possible to ensure victory for Esewezie and the 20 councillorship candidates of our great party,” Ajudua stated.

Also speaking, Ifeajika urged the party stakeholders to remain united in the days ahead to ensure a good outing for the party in the local government area.

“There is a renaissance and a reawakening in Oshimili North and I must thank God for the unity that currently pervades the leadership of the party in the area.

“Before now, we usually had bickerings and groupings that engendered disaffection among the leaders in the area, but those times are gone now.

“There is a new dawn, a new spirit in the area. Those issues and actions that divided the people have been thrown away – no more acrimonies.

“A lot of persons were instrumental to this new order in the area and we thank God because it’s redemption, liberation and emancipation time for Oshimili North.

“As you can see all the leaders are working in concert to ensure that we deliver all our candidates in the coming council polls and it will be resounding,” he said.

In his remark, Chairmanship candidate of the party in the area, Mr Innocent Esewezie, thanked the party for the close rapport between all the leaders.

He assured that with the calibre of people selected for the campaign council, the party was on the right track to victory.

Esewezie urged PDP faithful to strive for victory because the party would not renege in rewarding loyal members who contributed immensely to its success.

The exercise which also recorded the inauguration of campaign committees for the 20 wards in the LGA was attended by top politicians from the area, including Commissioner for Basic and Secondary Education, Chief Patrick Ukah; Special Adviser to the Governor on Health, Dr Austin Obidi; Dr Andy Ilabor; Mrs Doris Mokobia; Chief Shimite Bello and Mr Frank Esenwah.

Okowa lauds Atiku at 72, describes Waziri Adamawa as a patriot, democrat, man of...