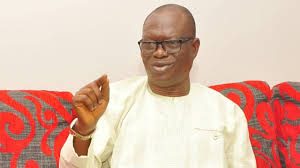 A former Secretary to the Delta State Government (SSG), Comrade Ovuozourie Macaulay has commiserated with the Etaluku family of Igbide in Isoko South Council area of the State over the demise of their patriarch, Chief Dennis E. Etaluku.

Macaulay, in a condolence message noted that though death is a compulsory end, it was painful to lose Chief Etaluku who once led the entire Isoko nation under the platform of the Isoko Development Union (IDU).

He recalled that Pa Etaluku was not just a community leader and mobiliser but also an astute politician who never shied from taking a stand on issues.

“Though you were vigorous in life, you were a man of peace who pursued peace till the end. Little wonder that you were appointed a member of the Delta State Advisory and Peace Building Council.

“Your doggedness and forthright will be missed by all.”

Macaulay prayed to God Almighty for the repose of his soul, and to grant the family the fortitude to bear the loss.

Be Voice of Caution, Reconciliation in Nigeria, Okowa tells CAN …Says Church Must Stand for Truth, Defend the Oppressed