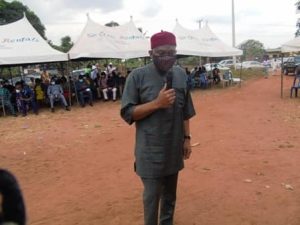 The inauguration of the Campaign Council, which is headed by a former Deputy Governor of the State, Chief Benjamin Elue, was sequel to the unveiling of the members by the Chairman of the party in the area. Dr. Charles Ochei.

The ceremony which held on Monday, 15th February, 2021 at the PDP Secretariat, Issele-Uku, Head quarters of the Local Government, was attended by the Minority Leader of the House of Representatives and member representing Aniocha/Oshimili Federal Constituency, Hon. Ndudi Elumelu, who was also named as a member of the Council, along with other leaders of the Party in the area.

Inaugurating the Council with the Campaign Organization headed by the Member representing Aniocha North State Constituency in the State House of Assembly, Hon. Engr. Emeka Nwaobi, the Aniocha North PDP Chairman, Dr. Charles Ochie, congratulated members of the campaign team on their appointment to serve the party in such an important assignment.

While stressing that the composition of the main campaign Council, the LG campaign organization and the other committees of the party in the Council area, was a clear attestation of the readiness of PDP to win all the positions in the forthcoming Local Government election in Aniocha North, Dr. Ochei commended the leaders of the party in the area for their support and pledged to continue to work with them towards sustaining the leading position of Aniocha North as the home of the PDP in Delta State.

“Mr Chairman, let me on behalf of the campaign Council and every committee that you have highlighted and just inaugurated, appreciate you for finding us worthy to serve the party in Aniocha North.

“We promise you and the party in Aniocha North that God giving us life and good health, we will not disappoint the party, we shall bring overwhelming victory to our great party in the forthcoming local government election. I sincerely thank everybody that is here and God bless all of us,” Hon. Elumelu stated.