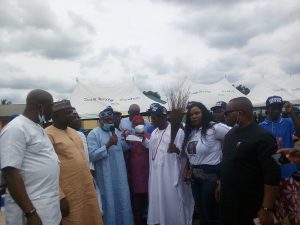 Chief Jerry Nkeweshe with broom, being received into APC by National Officers of the party at Onicha-Olona Ward 4.

Chief Jerry Nkeweshe, the Owelle of Onicha-Olona in Aniocha North Local Government Area of Delta state has dumped the Peoples Democratic party (PDP) for the All Progressives Congress (APC).

The grassroots politician who decamped on Thursday 25th March, 2021, with his numerous supporters was received and registered into the party by the full complement of the APC Revalidation and Registration Committee assigned to Delta State, led by the former Deputy governor of Ekiti State, Surveyor Abiodun Aluko.

Receiving Chief Nkeweshe into the party, Surveyor Aluko said they were in Onicha-Olona to carry out the revalidation and registration of APC members, an exercise they had been doing in Delta State for the past one month, and that luckily, Nkeweshe was decamping and that they came on behalf of the National Working Committee of the party to receive him into the party and register him, his wife as well as their supporters as APC members.

He said their presence was to ensure that APC moved faster and better in Delta State towards taking over the reins of government in 2023.

Receiving the APC broom and symbol of the party, Chief Nkeweshe told journalists that the decision to decamp to APC was a collective decision taken by him and his supporters. He said: “For over 16 years that I have been in PDP I have benefitted nothing from the party. Yet, I have been spending my money to maintain and keep the party wheels running and that there was no benefit.

“I never planned to join APC, but I received a call one day from His Excellency, the Deputy Senate President, Senator Ovie Omo-Agege, who said that he wanted someone like me , who has been committed and holding the party faithful together, and that he wanted me to join the APC.

“I spoke to my supporters and consulted them about it, and we all agreed to go and join the APC. His Excellency, Senator Ovie Omo-Agege who has a vision for Delta State believes that I have what it takes to help him achieve his vision for Delta state come 2023.”

Also on hand to receive Chief Nkeweshe and his wife, Mrs. Mary Jane Nkeweshe to the APC was Chief Omeni Sobotie, and aide to the Deputy Senate President, and one time political adviser to former Delta State governor, Chief James Ibori.

Highlight of the decampment was the presentation of a Lexus 300 jeep, a Toyota Corolla car and two brand new motor cycles to some supporters by Chie Nkeweshe, who promised to help build the APC in his Ward 4 Onicha-Olona.