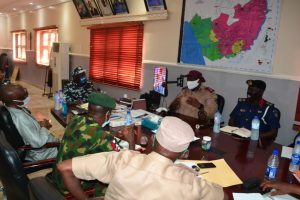 The Commissioner of Police Delta State Mr. Ari Muhammed Ali yesterday
5/3/2021 had a joint security meeting with sister agencies that
included the Nigerian Army,, NSCDC, Immigration, Federal Road Safety Corp, and NDLEA, as well as DSIEC and the representatives of the two major political
parties in the state, the PDP and APC.

DSP Bright said: “The CP assured all present that all modalities has been put in place to have a hitch free election, he said 8,292 Police men have been deployed, special constabularies are to assist police while about 3,000 personnel from other sister agencies have all been deployed to various polling unit.

“The CP stated that voters are to park their vehicles at least 300 meters away from the polling unit, while also stressing that there will be a joint patrol team comprising of the Police, NSCDC, and the Nigeria Army to patrol round the state in a bid to ensure that all the government directives are strictly adhered to. He advised all other security agencies to ensure that their men slated to be at various polling unit are deployed today Friday 5/3/2021, so that they will be at their polling unit as early as 0800 hours on election day.

“The DSIEC Chairman also informed the police and other agencies present
that students writing NECO exams should be allowed to move during the elections, as it is a national assignment, provided they present a valid means of identification.

“The Commissioner also advised the representative of both the PDP and APC to talk to their supporters, to ensure a hitch free election. In response, they said they have warned their supporters, and noted that election is not do a or die affair.