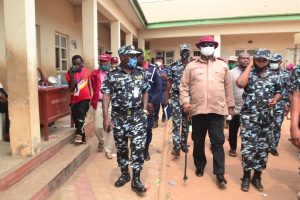 The Commissioner of Police Delta State CP Ari Muhammed Ali today 6/3/2021 along with sister agencies including the NSCDC, Immigration, Federal Road Safety Corps, and NDLEA went on supervision of security operatives deployed on the LG election duties, and also monitor the conduct of the elections.

According to a statement by the Acting Police Public Relations Officer (PPRO) DSP Edafe Bright, some of the polling units visited includes Abo-ator Primary School, Uzoigwe Primary School, Azagba Primary School, Ahabam Primary School, all in Oshimili South Local Government. During the routine visit to polling units, some violators of the restriction of movement order imposed by the state government were also arrested, their tricycles and vehicles impounded.

The Cp encourage voters to maintain calm, and continue to
comport themselves as they have been doing. The Election is generally
peaceful and monitoring continues.