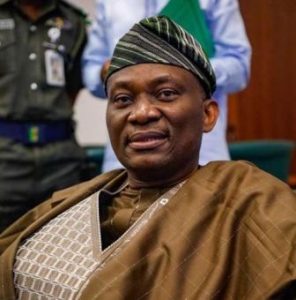 The Minority Leader in the House of Representatives, Hon. Ndudi Elumelu has congratulated Chairmen, Vice Chairmen and Councillors, elected under PDP in the just concluded Local Government election in Delta State.

In a statement on Monday 8th March, 2021, Hon. Elumelu said that their election is an act of God and a clear affirmation of the preference of PDP by the people of Delta state.

Hon. Elumelu urged them not to take the love and mandate of the People for granted, stressing that their election was for service delivery that will bring about peace, unity and progress within Delta State, in consonance with the policy direction of the State Governor, Senator Dr. Arthur Ifeanyi Okowa.

“I urge you to take your election as a divine assignment and service to the people of our dear state. you can only do that when you key into the Stronger Delta Agenda of our dear Governor, His Excellency, Senator Dr. Arthur Ifeanyi Okowa.

“The outcome of every democratic process is geared towards uplifting the standard of living of the people and this one that you are involved in should not be an exception.

“The template for you to succeed in your divine assignment to the people has been given by our leader, the Governor and I will sincerely advice you to key into it,” Hon. Elumelu admonished.

The minority leader, further called on them to be magnanimous in victory, saying that they were elected to serve the whole segment of the society and not a section of it.

“You have been elected in a landslide victory under our great party, however, be reminded that your are elected for the entire people of our dear state, irrespective of party affliction. You must therefore serve with all amount of humility and the fear of God.”

While commending the State Governor for creating the enabling environment for the election, Hon. Ndudi Elumelu hailed the Peoples Democratic Party, PDP, in Delta state for their well coordinated and sustained campaign in the build up to the election.

“I want to commend His Excellency, Senator Dr. Ifeanyi Okowa, the Governor of our dear state and leader of our great party, for his insistence in adhering to democratic tenets in this election, thereby proving that he is a Democrat and a product of democratic process.

“And again, I appreciate his Excellency the Governor, for making our campaigns easy through the provision of people oriented projects, scattered and located in every nook and cranny of the state.

“Let me use this opportunity also to appreciate our great party’s campaign councils in the 25 local government areas of our state for their steadfastness during the campaigns. Your effort and unity of purpose during the conduct of our campaigns were no doubt, instrumental to our party’s landslide victory in the just concluded local government election,” Hon. Elumelu stated, and promised that he would continue to work with the state government and the local governments towards ensuring a Stronger Delta State.

PDP to Tinubu: Your support for Buhari exposed who you truly are; says Atiku is a known Democrat

Okowa, a worthy ambassador of the Senate, says David Mark