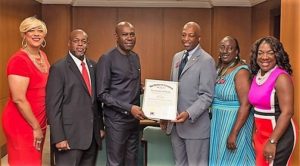 Drama ensued on Tuesday at the Delta state Magistrates Court 5, Asaba when a complainant, Sam Ogrih burst into tears and wept openly in court during the trial of two Journalists, Joe Ogbodu, managing editor of BIGPEN, an online newspaper and Prince Amour Udemude of the National Mirror Newspapers in Delta State.

The Delta State Police Command following a petition by Ogrih (plaintiff), had arrested Ogbodu and Udemude and arraigned them on Thursday, 23, October, 2019 at the magistrate court over a story attributed to the journalists on the bloody crisis that rocked Uzere community, Isoko South Local Government Area of the state.

In the reports, Ogrih was allegedly fingered in a N20m oil largesse crisis that rocked the community, and alleged to be sponsoring and funding armed youths with the codename “Freedom Fighters” which was said to had unleashed mayhem in the community, a development which resulted to indigenes deserting the community in October, 2019.

Ogrih had since denied his alleged involvement in the crisis and sponsorship of the armed youths, (Freedom Fighters) in the community.

In a charge No. CMA/425c/2019, the Commissioner of Police v Prince Amour Udemude and Joe Ogbodu, the two journalists are being charged for misdemeanor to wit defamation.

The state police command had before now abandoned the case but M. Omakor Esq holding a watching brief on behalf of his client, took over the case after writing to the state Ministry of Justice for a fiat which was later granted.

Ogrih, at the resumed hearing, Tuesday, led by his counsel, Martins Omakor, acknowledged that he was called by Udemude to hear his own side of the story but was shocked to read a story on SaharaReporters and BIGPEN online media, defaming him.

He described himself as a ‘reputable international businessman’ who has done much for his community and its environs.

The plaintiff who was being led in evidence suddenly burst into tears, pointing at Amour, one of the journalists, weeping, fighting off tears, and wiping his running nose with a white handkerchief, saying: “Amour, why did you do this to me?”

Ogri’s embarrassed counsel asked “why are you weeping, and doing this? Are you okay? Can we continue with this case? he asked his weeping client, who responded that he was okay and that the case should continue.

At this point, the obviously equally embarrassed presiding magistrate, B.N. Anumadu, (Mrs), immediately drew the attention of the plaintiff’s counsel to the unfolding drama, urging the counsel to caution his client, saying: “Please this is court”.

At this juncture, counsel to the plaintiff, Omakor, sought the permission of the court to tendered some computer print out of the said reports published by the online media as exhibits.

But, counsel to the Journalists, (defendants), Chuks Ebu objected to the admission of the computer print out, saying “they are public documents as such are not admissible in court.”

Continuing he said: “Only documents that are Certified True Copies (CTC) are admissible in court and that’s the law.”

The defendants’ counsel thereafter applied for adjournment of the case.

But the plaintiff’s counsel, objected to the adjournment, saying he was ready to continue with the case, arguing that any adjournment would cost him and his client additional expenses in accommodation and transportation, and therefore appealed to the court to award a N20, 000 cost of to his client.

After listening to both counsels, the Presiding Magistrate, B.N. Anumadu, (Mrs), granted the cost of N5,000 to the plaintiff against the defendants, and adjourned the case to April, 19 and May, 6, 2021 for continuation of hearing.