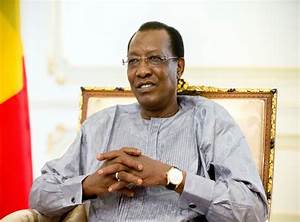 Chad’s President Idriss Déby has died of his injuries following clashes with rebels in the north of the country at the weekend, the army has said.

The announcement came a day after provisional election results projected he would win a sixth term in office.

The government and parliament have been dissolved. A curfew has also been imposed and the borders have been shut.

Déby, 68, spent more than three decades in power and was one of Africa’s longest-serving leaders.
An army officer by training, he came to power in 1990 through an armed uprising. He was a long-time ally of France and other Western powers in the battle against jihadist groups in the Sahel region of Africa.

Déby “breathed his last defending the sovereign nation on the battlefield”, an army general said on state TV on Tuesday.

He had gone to the front line, several hundred kilometres north of the capital N’Djamena, at the weekend to visit troops battling rebels belonging to a group calling itself Fact (the Front for Change and Concord in Chad).

A military council led by Déby’s son, a 37-year-old four star general, will govern for the next 18 months.

Mahamat Idriss Déby Itno will lead the council but “free and democratic” elections will be held once the transition period is over, the army said in its statement.
Ahead of the election on 11 April, Déby campaigned on a platform of bringing peace and security to the region.

But there has been growing unhappiness over his government’s management of Chad’s oil resources.
Idriss Déby was known as that rare thing – a true warrior president. The former rebel and trained pilot was the opposite of an arm-chair general.

For 30 years he clung to power in Chad – a vast nation that straddles the Sahara and is surrounded by some of the continent’s most protracted conflicts.

And Déby had a hand in every one of them. From Darfur, to Libya, Mali, Nigeria and the Central African Republic. His troops were among the most battle-hardened on the planet.

Idriss Deby Itno, who was on course for a sixth term as Chad’s president before he died from injuries sustained in battle, had carved out a reputation as the West’s stalwart ally in the Sahel — despite accusations of authoritarianism.

The 68-year-old son of a herder would have been one of the longest-serving leaders in the world, after provisional results showed him winning reelection this week.

But his shock death cut his 30-year political career short and will likely throw Chadian politics into disarray.

He died from injuries sustained while fighting rebels this weekend in the country’s restive north, the army said Tuesday.

His death comes after elections this month that were marred by a rebel offensive launched in the north on election day. The army said Monday it had killed 300 rebels and quashed the offensive.

Deby’s long rule in the region’s brutal politics has made him a reliable figure in the French-led campaign against jihadist insurgents in the Sahel.

Deby, from the Zaghawa ethnic group, took the classic path to power through the army, and relished the military culture.

Last August, the National Assembly named him field marshal, the first in Chad’s history, after he led an offensive against jihadists who had killed nearly 100 troops at a base in the west of the country.

Dressed in a dark-blue silk cape embroidered with oak leaves, and clutching a baton, Deby dedicated the tribute to “all my brothers in arms.”

As a young man, Deby enrolled at the officers’ academy in the capital N’Djamena before heading to France, where he trained as a pilot.

He returned in 1979 to a country in the grip of feuding warlords.

Deby hitched his star to Hissene Habre and was rewarded with the post of army chief after Habre came to power in 1982, ousting Goukouni Weddeye.

In the following years, Deby distinguished himself fighting Libyan-backed rebels over mountainous territory in the north of the country.
Source:

Okowa to Police: Curb kidnapping in the country