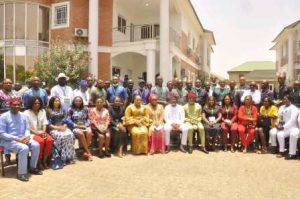 Aniocha-Oshimili elected Local Government Council officials in a group photograph with the Speaker, House of Representatives, Rt. Hon. Femi Gbajabiamila and Hon. Ndudi Elumelu and other VIPs at the capacity building organised and sponsored by Ndudi Elumelu the newly elected council ooicials in hi constituency in Abuja. 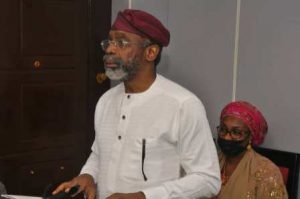 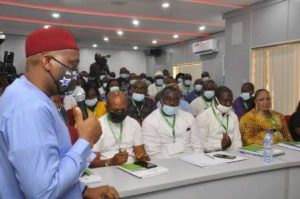 The Speaker of the House of Representatives, Rt. Hon. Femi Gbajabiamila has commended Hon Ndudi Elumelu for supporting the development of newly elected Local Government Council officials in his Federal Constituency, towards effective management of the Local Government administration in Delta State.

The two day leadership training program which ended on Tuesday, 13th April, 2021 was sponsored by the Minority Leader of the House of Representatives, Hon. Ndudi Elumelu, in conjunction with Gotni Leadership Development Center, Abuja.

The Speaker described Local Government as the foundation for representative democracy in Nigeria and said that efforts towards promoting effective and efficient Local government System should be commended.

“Ideally, it ought to be the center of governance activities and government innovations that serves to improve quality of life for Nigerians.

“The system we have in place now has not served as well because of obvious overemphasis on the centralised policy, planning and implementation at the federal government level.

“We have an obligation to try as much as we can to change the status quo in favour of an alternative that serves present needs and meets future expectations,” Rt. Hon. Gbajabiamila stated.

The Speaker noted that there has been a lot of misunderstanding about the local government system in the country, even as he observed that many elected local government chairmen and councillors do not understand the role for which they were elected.

He therefore charged the participants to avail themselves the opportunity of the training to be equipped toward helping to add value to the effective and efficient management of the local Government System in Nigeria.

Fielding questions from Journalists, Rt. Hon. Gbajabiamila spoke on the much talked autonomy for the Local government, saying that Nigerians and not National Assembly will have to determine the issue of Local government autonomy.

“Nigerians have the opportunity to decide what type of local government system they want through the ongoing constitutional amendment.

“It is not for us as legislators to do that. I’m sure you’re surprised. But it’s actually for the people to address. We have constitutional amendment, we will throw it to the people and they will make their decision.

“We did it the last time and went back to the states as required by the constitution. But we couldn’t get the 2/3rd. There is a process and we followed due process.

“We amended it last time but 2/3rd of the states did not agree with us. So it’s the people that will decide whether they want autonomy or not. We will do what we need to do as the Constitution provides,” he said.

They all noted that the training will go a long way in making the beneficiaries good drivers of the government at the grassroots and urged the Chairmen, their Vice Chairmen, as well as the Councillors, to bring all that they have garnered during the training, to bear in the management of their various Local governments in Delta State.

Earlier, Hon. Ndudi Elumelu had, in his opening remarks, thanked the Speaker and other guests for honoring his people by being at the opening ceremony.

Elumelu emphasized that the leadership training program was his own contribution towards helping to enthrone a proactive and efficient leadership in the local government councils in Aniocha/Oshimili Federal Constituency, which he represents at the Federal House of Representatives.

The Minority leader said that his effort was in consonance with Governor Ifeanyi Okowa’s human capital development agenda for a Stronger Delta State.

The elected council officials were able to garner knowledge on various areas of leadership and administration like: Redefining leadership, operational efficiency, team work and productivity, politics and the pursuit of legacy, networking for result, leadership dynamics as well as why leaders fail.

In an interview with Journalists, the Chairman of Aniocha North Local Government Council, Hon. Kevin Okwechime and his Aniocha South counterpart, Mr. Jude Chukwunweike, were full of praises for Hon Ndudi Elumelu and promised, on behalf of other participants, to impart the knowledge acquired in the effective and efficient management of their various councils.

The two day training program which ended on Tuesday, April 13, 2021, had two Council Chairmen, two vice chairmen and 40 Councillors in attendance, bringing the total number of elected council officials that participated in the two batches of the leadership capacity building training program to 88.

Participants, at the conclusion of the training program of both the first Batch and second Batches, were taken on a guided tour of the National Assembly, where they visited the office of the Minority Leader, amongst other key offices.

The participants, at the conclusion of each of the batches, were also treated to a sumptuous dinner party in their honour by the Minority leader, Hon. Ndudi Elumelu, at the prestigious Transcorp Hilton, Abuja.

MRA inducts Federal Ministry of Education into ‘FOI Hall of Shame’ for undermining the...