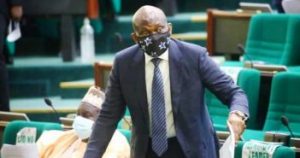 The Peoples Democratic Party (PDP) has insisted that the motion by the Minority Leader of the House of Representatives, Hon. Ndudi Elumelu (PDP Delta), demanding the resignation or sack of the Minister of Communication and Digital Economy, Isa Pantami, was validly laid before the House, adding that it reflects the position of majority of Nigerians across board.

In a statement on Saturday, April 24, 2021 by Kola Ologbondiyan, its
National Publicity Secretary, the party berated the APC leadership in the House of Representatives for the statement in which it attempted to “create a parliamentary cover for the indicted minister, despite his being exposed as an apologist of terrorist groups, including Al-Qaeda and Taliban.”

The PDP Statement reads in full:

“The PDP asserts that the manifest desperation in the statement, particularly in resorting to personal attacks on the Minority Leader as well as the spokesman of the Minority Caucus, Hon. Francis Agbo, further exposes a huge conspiracy by certain individuals working in tandem with terrorism apologists to frustrate genuine efforts to curb acts of terrorism in our country.

“Our party alerts Nigerians of a scheme by the APC leadership in the House of Representatives to create unnecessary controversies, ostensibly with a view to divert public attention from the pertinent issues at hand and by so doing, provide official cover for a confessed terrorism apologist in the Federal Executive Council.

“The PDP commends the Minority Leader, Hon. Elumelu and the minority caucus in the House of Representatives for their patriotism and courage in standing on the side of Nigerians at this critical moment, in line with the already established position of the PDP.

“The party therefore urges the minority caucus to remain focused and not to be distracted by the activities of forces sympathetic to terrorist groups.

“Furthermore, our party notes that the provisions of Order 6 (Privileges), under which the Minority Leader presented the minds of Nigerians, are clear in the pursuit of national interest.

“Anybody seeking to frustrate the import of the motion does not have the interest, security and wellbeing of the nation at heart.

“The PDP therefore urges President Muhammadu Buhari to reassure the nation by heeding the voice of Nigerians, as contained in the statement by the Minority Leader, and relieve Isa Pantami of his position as his continued stay in office poses a grave threat to our national security.”