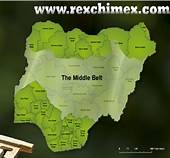 The Middle Belt in Nigeria.

The Middle Belt Forum, MBF, has cautioned the President Muhammadu Buhari led Federal Government to desist from imposing Fulani from all parts of Africa on Nigeria, insisting that Nigeria is not a Fulani colony.

National President of MBF, Dr. Bitrus Pogu sounded the warning Tuesday in Makurdi while reacting to the statement by the Senior Special Assistant to the President on Media and Publicity, Mallam Garba Shehu who questioned the legality of the decision of Southern Governors to ban open grazing hinting that the Federal Government would commence rehabilitation work on grazing reserves in the country next month.

The MBF urged all Nigerians to join forces with southern governors to resist the evil plot and not allow it to happen.

According to him, “we have a government that is so distant from reality. We have never had this kind of government before. A government that is living in the 50s while we are now in the 21st century. It is just unfortunate.
“Given that they have made the statement, all we can do is to first of all appreciate their mind set. Their mind set is archaic and retrogressive. It is sectional and nepotistic.
“A real government is supposed to look at the realities of the moment and see how the government can holistically develop the entire society called Nigeria.

“And it is unfortunate because Governors have roles as provided by the constitution, because they are the Chief Security Officers of their states.
“They have seen the situation that under the cover of herding people commit heinous crimes, killing people, sacking them from their ancestral land and destroying their crops and making life even uncomfortable to the extent that they cannot go to farms anymore.

“So what the Governors did was appropriate to ensure that the herders must start to ranch if they want to stay in the place. The right the constitution gave to everybody to reside in any part of the country does not give them the right to make life uncomfortable for others in that part of the country.

“This government needs to know that they are there to govern the entire Nigeria and not to govern a section of Nigeria and impose the wishes and wills of that section on other Nigerians.

“Those of us in the Middle Belt have cried out loud and clear for a long time. Now it has gone southwards and they are being heard. So the Southern Governors have the constitutional right to remain the Chief Security Officers of their states.

“They work within the constitutional provision to protect their people because the first assignment of government is security and welfare and what they are doing is to provide security for their people.

“They have the right under the constitution to do that. The federal government may go to the Supreme Court for interpretation but as far as I am concerned, the Governors have the right to secure their people.

“Again, majority of the herders who are attacking the people are not even Nigerians. This government all along says Nigerians know their local Fulani herders. So a policy should come out that would accommodate the local Fulani to start ranching in the places they are known.